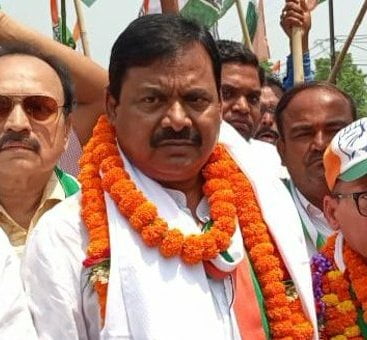 Bhubaneswar: In order to strengthen party organisation and boost the confidence of workers at grassroots level, newly appointed president of Odisha Pradesh Congress Committee (OPCC) Sarat Patnaik announced to launch padyatra in every district of the state.

Speaking on the first day of the two-day ‘Snkalp Sibir’ of Congress, being held in Odisha capital, Patnaik said he would join the party workers to take out the padyatra in each district.

Calling upon the leaders and workers not to lose confidence for reduced strength of the party in state Assembly, Patnaik said, “We cannot remain complacent because of less representation. We should not have the mindset that we cannot fight because we have only 9 MLAs in the state.”

“We must tighten our belt to take on the might of ruling BJD in coming elections. In order to be prepared for the fight, we must remain united and wage a concerted war,” Patnaik said.

Clarifying that he did not believe in groupism, he said, “I do not have any discrimination about the leaders and workers. Everybody is free to approach me with whatever suggestions and plans to strengthen the party.”

In a clear message to the leaders against factionalism, he told them to refrain from whisper campaign. “We are one family –  Congress family. We must remain united and fight for growth of the party in Odisha,” he said.

Tata Group India’s Most Valuable Brand Once Again; Check Out The Top 4