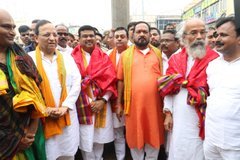 All newly elected BJP MLAs and MPs from Odisha also joined the Union ministers in offering prayers at the Jagannath temple. 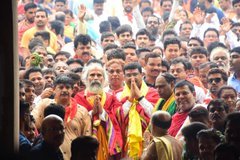 After offering prayers, the ministers attended a review meeting at the circuit house in Puri.

Odisha will be in number one position in the industries sector and Odisha will be a steel hub, Minister of Petroleum and Natural Gas Dharmendra Pradhan said.

Union Minister of State for MSME, Pratap Sarangi, said steps will be taken for farmers engaged in coconut cultivation in the state.

Notably, this is the first visit by both ministers to Odisha after being sworn in as Union ministers in the Narendra Modi 2.0 Cabinet. Thousand of supporters and BJP leaders welcomed them at the Biju Patnaik International Airport in Bhubaneswar.

Pratap Chandra Sarangi has become a favourite among people for his simple lifestyle. Sarangi won the Balasore Lok Sabha seat, defeating the BJD’s Rabindra Jena by over 12,000 votes. He is a resident of Balasore district and used to work as a clerk in a college when he was influenced by the RSS. He uses a bicycle to commute. He is being touted as Odisha’s Modi. He received loud applause from the audience when he arrived to take oath in the new government.

Dhoni Not Bigger Than Rules, Says Gavaskar On Gloves