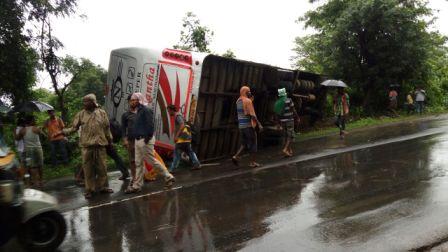 Kandhamal: At least 20 people sustained critical injuries after a bus carrying them hit a tree near Bisipada in Kandhamal district on Friday.

The injured were rescued by local residents and rushed immediately to the district headquarters hospital.

The bus named ‘Rajkumar’ was heading towards G.Udayagiri from Phulbani when the accident took place.
According to eyewitnesses, the mishap had taken place due to the rash driving by the driver.
bus accident
Share FacebookTwitterGoogle+ReddItWhatsAppPinterestEmail

These Migrant Odisha Workers Could Never Re-Unite With Their…