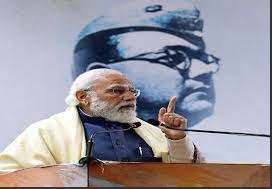 New Delhi: Reminding the nation of Netaji, who said, ‘Never lose faith in the dream of independent India. There is no power in the world that can shake India,’ Prime Minister Narendra Modi on Sunday spoke about his government’s target to build a new India before the 100th year of independence.

The Prime Minister said, “Today we have a goal to fulfill the dreams of an independent India. We have a target to build a new India before the 100th year of independence, 2047.”

The central government had launched this new scheme in 2017, on the occasion of the 75th anniversary of the Quit India Movement. A five-year scheme from 2017 to 2022, the New India Movement Program envisaged many programmes and schemes across the nation for the betterment of the citizens of India.

Among its areas of focus were:

In August 2021, Union Commerce Minister Piyush Goyal said that “‘India@75’ is a declaration for a new India with new dreams, new energy and new commitment. India wants to mark 75th Independence Day as a watershed moment in its history. At 75, we must look ahead with a clear vision, blueprint and resolve for the next 25 years.”

Given that there will be a mandate in 2024 and more till 2047, will PM Modi’s vision of a new India survive the political upheavals?