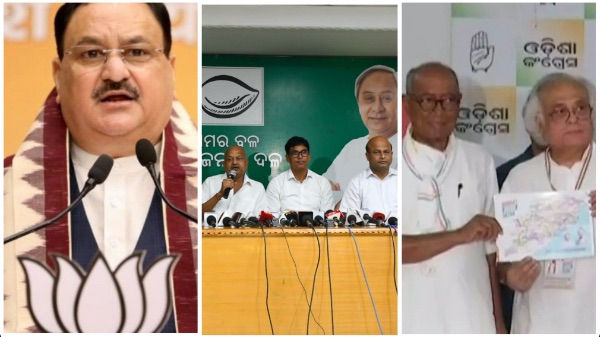 Bhubaneswar: With the politicosphere warming up in Odisha, September 29 is set to witness a flurry of activities with parties jostling for space ahead of the 2024 elections.

BJP national president J P Nadda will arrive in Odisha on a two-day visit on Thursday and address around 20,000 party workers at Janata Maidan in Bhubaneswar after taking part in a roadshow from the airport to the meeting venue. To steal the saffron party’s thunder, the ruling BJD is planning a similar gathering of frontal organisations – women, youth, students and minorities wings – to be addressed by Chief Minister and BJD president Naveen Patnaik through video conferencing on the same day.

The BJD will also be holding a two-day interactive session prior to the party’s customary Jana Sampark Padayatra starting October 2 to November 2 in a bid to transform the regional party into a people’s movement. “Around 2000 party workers and members of youth and women’s wings will participate on the first day, while a similar number of party functionaries, MPs, MLAs, Mayors will attend the second day of the session,” party leader and former minister Arun Sahoo told a presser on Tuesday.

On Monday, Naveen wrote to all party functionaries on how to organise this year’s padayatra.

Coincidentally, Congress is likely to draw plans for the Bharat Jodo Yatra to commence in Odisha from the Indira Gandhi Park in Bhubaneswar from October 31 for a period of 100 days. Odisha Pradesh Congress Committee (OPCC) president Sarat Patttanyak is expected to spell out the routes of the party’s localised campaign on this day.

These political activities are significant considering that the three major political parties in the state are making efforts to strengthen the party apparatus with an eye on the next elections.

Almost a month after Union Home Minister and BJP chief strategist Amit Shah’s assertion that BJP would oust the BJD and form government in Odisha in 2024,  the BJD had organised a grand welcome for Naveen on his arrival from New Delhi after receiving the Lifetime Achievement Award by the Capital Foundation Society for outstanding leadership.

As the BJD president took out a rally with around 50,000 people cheering for him from Biju Patnaik International Airport to Naveen Niwas, the BJP’s general secretary in-charge of Odisha Sunil Bansal took stock of the saffron party situation. The BJP leaders, especially their women leaders, also marched to Raj Bhavan highlighting the failures of the BJD government.