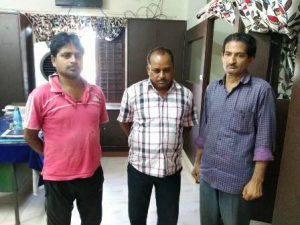 Keonjhar: Police on Monday arrested three persons for allegedly betting on a IPL match at a house near Tarini temple in Barbil of Keonjhar district late on Sunday night.

A police team raided the area after getting information that a betting racket operated from the house. Three persons, identified as Mahabir Prasad Maheswari, Mohammad Rafid and Nimei Sahu, were arrested from the spot for placing bets on the IPL final match between Rising Pune Supergiant and Mumbai Indians.

Police recovered cash to the tune of Rs 2.40 lakh and seven mobile phones from the accused. The mobile phones recovered from them would help in tracing their links and persons involved in the IPL betting racket. Simultaneous raids are being carried out at different places of the state to nab more persons involved in the racket, police sources said.

Registration commences for plus II admissions in state