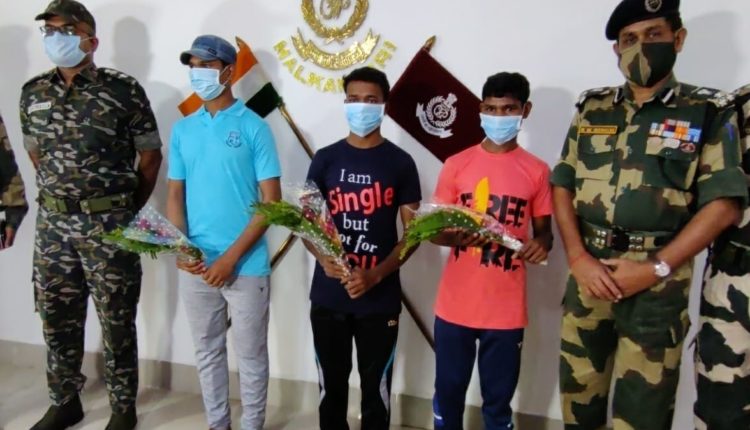 Informing mediapersons the SP identified the three as  Mainu alias Sambhu Dodi of Chinaterem village and Rama Apka of Ganglur village in Bijapur district of neighbouring State Chhattisgarh and Raghu Khara of Beijing village in Malkangiri district of Odisha.

Mainu had joined the banned Maoist in 2009 and was working as Area Committee Member of AOBSZC Military Platoon at the time of surrender. Odisha Government had announced a cash reward of Rs 4 lakh to whosoever gives information about him.

Rama joined the outfit in 2009 and was working as Area Committee Member of AOBSZC Military Platoon during surrender. He too was carrying a cash reward of Rs 4 lakh on his head.

All of them will be properly rehabilitated and will receive monetary assistance as per the Surrender and Rehabilitation Scheme of Government of Odisha. They will also get financial assistance for building house, pursuing studies and getting training in a trade/vocation of their will.

Influenced by various developmental activities being undertaken by Odisha Government, they decided to surrender, police informed.

They also disclosed that remaining few local/active Maoist cadres are willing to surrender and join the mainstream of the society because of the torture by Chhattisgarh and Andhra Cadres.