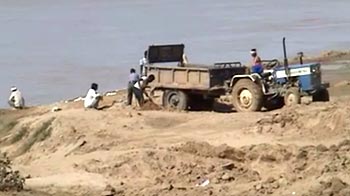 Acting on a tip-off, Gunupur additional tehsildar intercepted two tractors carrying sand illegally from Bansadhara river bed. A fine amount of Rs 20,000 was collected from both the vehicle owners.

Later, another tipper truck was also flagged down while it was about to transport sand from Kalma area in the district. The officials found that the driver had no valid documents for transporting sand.

The drivers of all the three vehicles have been detained.