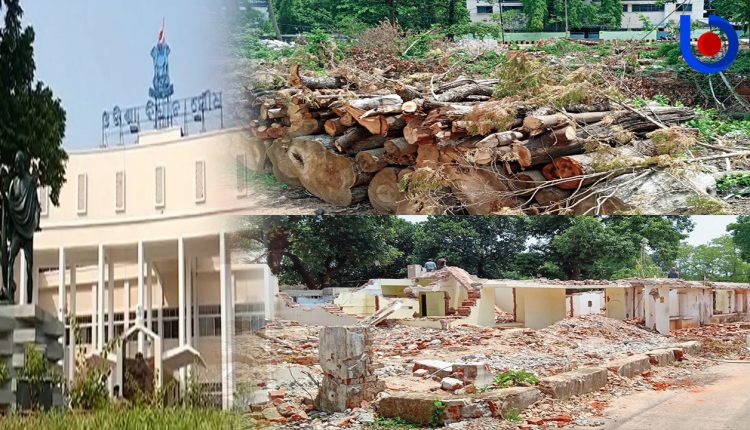 Bhubaneswar: As the authorities are all set to give pace to construction of high-rise apartments for Odisha MLAs in the heart of Odisha capital, some 300 more trees are likely to be felled to make way for the Rs 549 crore project.

Over 320 trees, many of them decades old, have already been felled in Unit 4 area of Bhubaneswar for the construction of the proposed modern MLA colony, while many old buildings were also demolished in the site.

A massive operation is now underway to shift the debris and logs of the chopped off trees from the area and clear the site to facilitate the construction work.

According to sources, the authorities had initially planned to cut 870 trees of 26 different varieties for the project. The felling of trees was undertaken near the Assembly building where earlier the MLA colony was located. Almost all the quarters have already been demolished.

While the Odisha Forest Development Corporation (OFDC) is engaged to cut the trees, the Odisha Bridge Construction Corporation  (OBCC) has been entrusted with the job of building the high-rise structures.

To make up for the felled trees, it has been planned to plant 8,700 saplings, ten-time of the trees that are being chopped off for the project. All these saplings would be planted under the compensatory afforestation project and the OBCC has reportedly deposited Rs 68.70 lakh in the account of the city forest division for the purpose.

Sources said a meeting was also held in June this year to discuss steps to replant some of the trees at suitable places. In the absence of required machinery, it will not be possible to replant all the 870 trees in a short time. While 40 trees have already been shifted and replanted, more are being shifted.

Following this exercise, the number of trees required to be felled for the project has now come down to 680 from 870.  So far, 310 trees have already been felled, the sources said.

Most of the trees were planted after the Odisha Assembly’s colony was set up. ‘The trees include mango, Jamun and other trees. A few trees are more than 70 years old.

Sources said there is no restriction on starting construction work for the high-rise apartment complex for the legislators as the High Court has not put any stay on implementing the project.