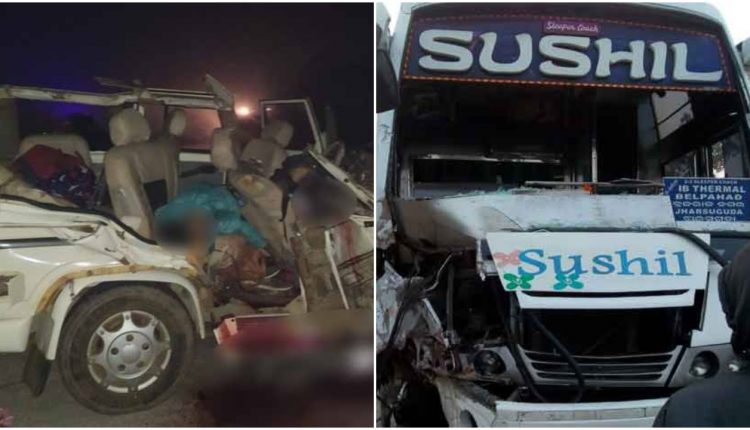 Angul: Four were killed when a Bolero jeep collided with a private bus near Katada in Chhendipada area of Angul district in the wee hours of Tuesday. Six others, including two children, were admitted to a hospital with grievous injuries.

According to reports, the accident occurred around 2.30 am when nine persons of two families from Chhattisgarh were going to Puri on a Bolero jeep (CG-04-HK-0183). The driver suddenly lost control of the vehicle, which rammed into an Ib Thermal-bound private bus from Bhubaneswar. Three women and the jeep driver died on the spot.

Later, police and a Fire Brigade engine rushed to the spot and admitted the six injured including two children to the district headquarters hospital in Angul. Of them, an 11-year-old boy, Govind Namdev, was later shifted to SCB Medical College and Hospital in Cuttack in a critical condition. Doctors said another of the injured, Nilesh Dhurab, may also be shifted to Cuttack if his condition becomes critical.

The collision was so severe that police could only bring out the injured persons and the bodies after cutting the jeep’s doors with a gas cutter.

Police have registered a case and efforts are on to trace the bus driver who had fled after the mishap.

Odisha To Ring In New Year With Intense Cold