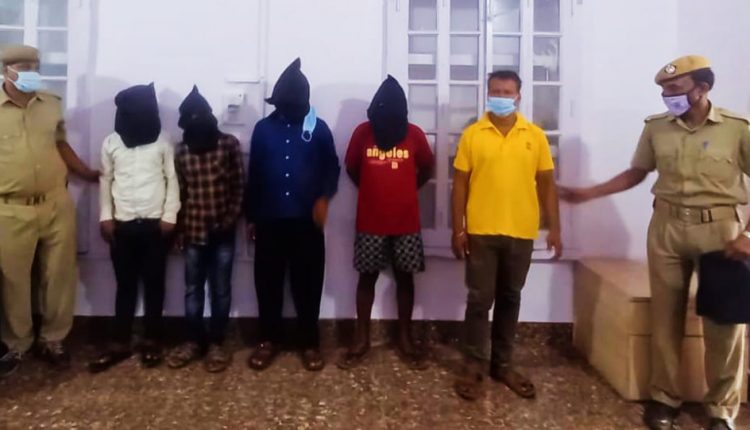 Keonjhar: The police on Thursday arrested five persons in connection with the bomb hurling incident on October 10 to target Keonjhar MLA Mohan Majhi (BJP) at Mandua Ardei in the district.

The police who arrested the five and produced them in the court on Thursday indicated that the bomb hurling incident was the fallout of previous animosity pertaining to financial dealings with the Bharatiya Janata Party legislator.

The Town Police have registered a case (No. 391 under IPC sectin 307/34, E & S Act ) after arresting the accused, identified as Pratap Raut, Bidyadhar Parida, Sarat Chandra Jena, Sashibul Sheikh and Manmohan Das. The police have also seized two thread bombs and a motorcycle from the accused against whom there are several cases pending.

The cops are on the lookout for another accused and investigations are underway, said Keonjhar Police Superintendent Mitrabhanu Mohapatra. Talking to mediapersons, he said he does not see any political motive behind the attack. The police denial of Biju Janata Dal leader Raja Chakra’s hand in the incident caused furore in BJP circles.

The investigation picked speed after nine BJP MLAs reached Keonjhar on Monday in solidarity with BJP Chief Whip and threatened to launch an agitation if the culprits are not arrested immediately. The saffron legislators also alleged that Keonjhar Superintendent of Police was shielding the accused in the case and demanded his transfer at the earliest. Subsequently, the police released the video footage and sketches of the accused.

Legislator Mohan Majhi also demanded the transfer of SP Mitrabhanu Mohapatra and CBI probe into the incident as he was prompting the main accused to adopt a particular stance so that he can escape punishment.