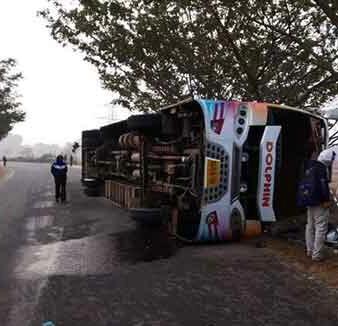 Boudh: Five passengers were critically injured as a passenger bus they were travelling in turned turtle near Masina Gora under Manamunda police limits in Boudh district early on Friday.

According to sources, the accident took place at around 3 am when the bus, carrying 38 passengers, was on its way to Raipur from Cuttack. The driver reportedly lost control of the vehicle and it overturned.

Manamunda police reached the spot and admitted the injured passengers to a nearby hospital. Other passengers were sent to the destination point by another bus.

Further investigation into the matter is underway.