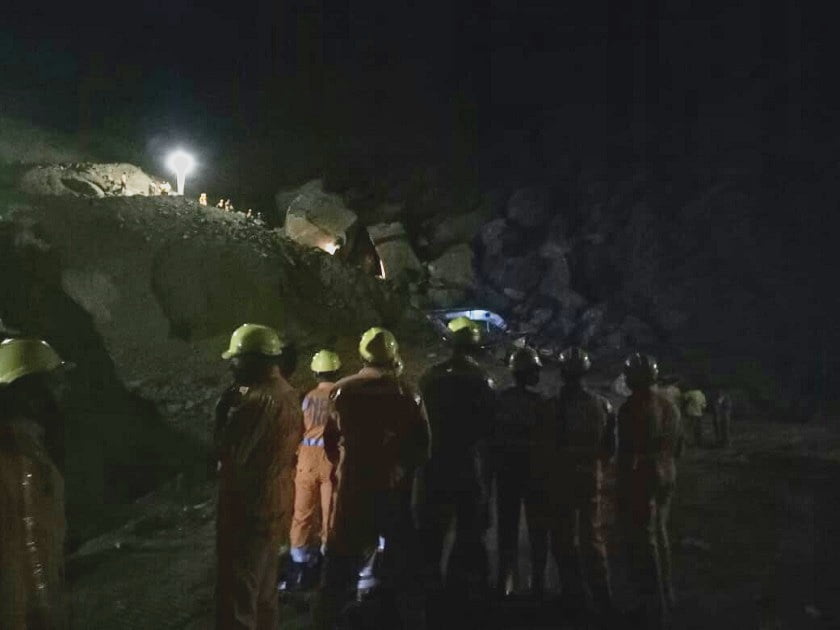 Jeypore: The Koraput district administration which failed to rescue the two JCB operators from under a heap of boulders near B.Singpur forest area under Borrigumma block, will make another attempt on Sunday.

The two JCB operators— Ghanshyam Guru of Deogarh and Sanjay Dash of Athgarh area in Cuttack district— have been stuck under a heap of boulders since evening on May 31.

The rescue operation had begun for the second time at Bariput on Saturday night in the presence of the Koraput collector, deputy collector and other senior district officials. However, despite night-long efforts, the ODRAF and NDRF teams failed in their mission. The district administration had requisitioned a big crane from the NNDS company which was of no use as it could not lift the boulders whose average weight would be around 20-50 tonnes.

The two JCB operators were engaged in excavating boulders in the ongoing Telengiri Irrigation project in Bariput village when the hill caved in around 7 pm on Thursday trapping the vehicles along with their drivers.

Though a joint team of Odisha Disaster Rapid Action Force (ODRAF) and fire brigade officials had begun the rescue operations on Friday morning, they had failed in their efforts.

The Bariput villagers said prior to the incident, the stone mining operation was on for the last two days.

Meanwhile, the distraught family members of the two trapped JCB operators arrived at Bariput on Saturday.

Expressing resentment against the gross apathy of the DD Constructions Ltd which had engaged the workers without ensuring standard operating procedure (SOP) norm, have lodged a complaint at Ranigada outpost demanding cancellation of the license of the company.

Meanwhile, Borrigumma police are in search of the contractor of DD Construction Ltd.

Leopard Trapped In Net Laid By Poachers Rescued In Odisha’s…