Berhampur: In Subalaya panchayat in Ganjam district, a palm tree is now sporting newly-sprung, intricately-woven and helmet-shaped nests. Baya weavers can be seen hanging from the nests, guarding their homes.

What is eye catching is that more than 75 nests of Baya weaver (Ploceus philippinus) birds have been sighted hanging from a single tree situated in an agricultural field of the panchayat.

“So many nests on a single tree is a positive sign as the population of weaver birds is declining due to exposures to constant urbanisation,” said Sahu.

Baya, the weaverbird, has been omnipresent in Odia literature and popular folklore. Weaver birds live in grasslands, cultivated areas, and shrubs. They are generally found near fresh or brackish water bodies. These birds are small in size and non-breeding males and females look alike, the researchers said.

The male weaver birds build nests to attract female birds. The males take about 20 days to build a nest and they prefer to live in a colony with several nests on a single tree. One female lays about 2 to 4 eggs in the nest.

The problem of habitat and non-availability of food grains led to the decline of these birds. The artistic nests of weaver birds were a common sight all around Ganjam about a decade back but there has been a sudden decline in their numbers as palm and date tress were chopped. 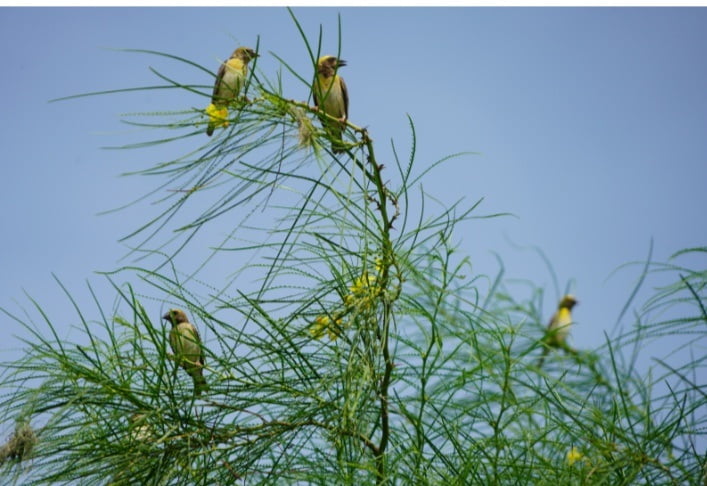 He blames the increasing use of microwave towers by mobile phone operators as the main reason behind the vanishing of small birds from urban habitations. Moreover, these birds live on small insects and grains. Rampant use of pesticides has poisoned the food of the birds, he added.