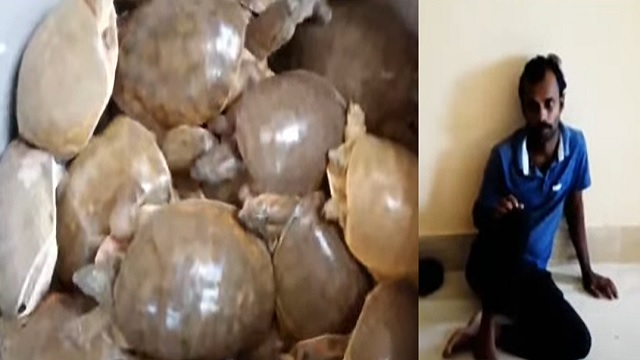 Balasore: More than 80 turtles were rescued by forest officials during a raid near Chalanti bypass road on National Highway-70 under Jaleswar police limits in Odisha’s Balasore district.

Acting on a tip-off, a team of forest officials on Tuesday night carried out the raid near Chalanti bypass road while the illegal trade was under way and arrested a youth, identified as Debabrata Dey, in this connection. The officials also seized a bike from the spot.

According to sources, a total of 87 turtles were being smuggled to West Bengal. The accused, Debabrata, was selling the turtles at Rs 250 per kg.

“We keep receiving reports about smuggling on this national highway. We spotted him carrying two heavy sacks on both sides of his bike. We suspected something fishy and followed him and apprehended him near Chalanti bypass road,” said Jayashri Murmu, Jaleswar Ranger.