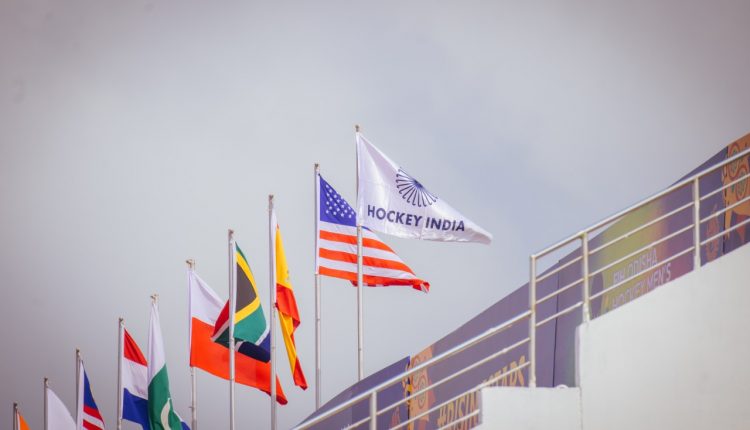 Bhubaneswar: The wait is over, finally. The Kalinga Stadium here is ready for the inaugural ceremony, festooned by flags of the participating nations, looking bedecked and colourful.

Tomorrow, the FIH Junior Hockey World Cup will be off to a start at the stadium with Belgium and South Africa playing the opening match following the inaugural ceremony. India also plays France on the first day.

Teams from 16 countries are participating in the tournament, to be held from November 24 to December 5. India is in Pool B with Canada, France and Poland. Pool D has Pakistan, Argentina, Egypt and Germany. In Pool A, it’s Belgium, Chile, Malaysia and South Africa. South Korea, Netherlands, Spain and the US make up Pool C.

Australia, New Zealand and England did not send their teams in view of COVID-19 regulations back home.

Players and officials will undergo RT-PCR tests every 72 hours, an official said. On an average, 500 tests are being conducted daily and same-day reports generated by ICMR’s Regional Medical Research Centre here.

Fans are looking forward to an India-Pakistan clash and hoping that India, defeated by Pakistan in the ICC T20 World Cup recently, get a chance to settle scores.

An India-Pakistan clash is possible if both teams advance from their respective groups by finishing among the top two in their pools.

It’s for the first time that a Pakistan hockey team is in India since 2018 after a gap of three years.

Pakistan players were denied visas for the Junior Hockey World Cup in 2016, the year of the Pathankot and Uri attacks, followed by the surgical strikes.

In 2019, Pakistan’s shooting team missed the Delhi World Cup for the same reason, which almost led to India’s sporting isolation, in the shadow of the Pulwama terror attack.

But after warnings by the International Olympic Committee, the government assured that sportspersons from Pakistan would not be stopped from coming to India.

Both Odisha and Uttar Pradesh were keen to host the FIH Junior Hockey World Cup this year but the former was selected as it’s the national team’s title sponsor as well.

“It is a short notice for making arrangements for such an event, especially during the pandemic period. However, since the country’s prestige is at stake, we have readily agreed to host it,” Odisha Chief Minister Naveen Patnaik had said earlier.

Odisha is also set to host the 2023 FIH Senior Men’s World Cup in Bhubaneswar and Rourkela.