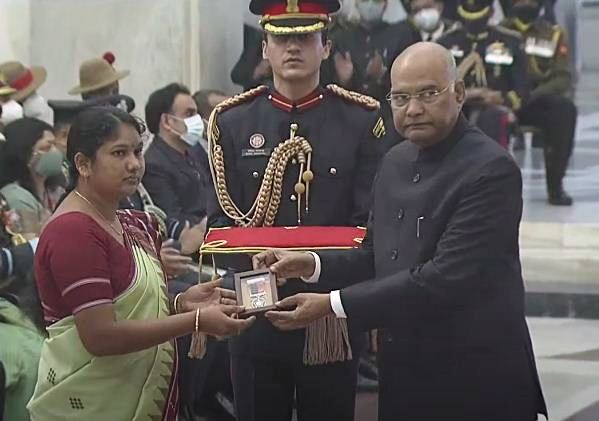 New Delhi: Naib Subedar Nuduram Soren, a native of Odisha’s Mayurbhanj who laid down his life while resisting a vicious attack by Chinese Army soldiers in the Galwan valley in the Ladakh sector in June last year during Operation Snow Leopard, was awarded Vir Chakra (posthumously) on Tuesday.

His wife received the award from President Ram Nath Kovind during the third session of the Defence Investiture Ceremony at the Rashtrapati Bhavan here.

Soren was one of the 20 soldiers martyred at the Galwan valley and named for the Vir Chakra award in January this year.

The martyr is survived by his wife and three daughters.

Another Odia jawan Chandrakant Pradhan from Kandhamal district was also martyred during a violent clash with Chinese troops along the India-China border.

Soren was part of the 16th Bihar regiment. He was also a cross-country runner and an avid football and hockey player.