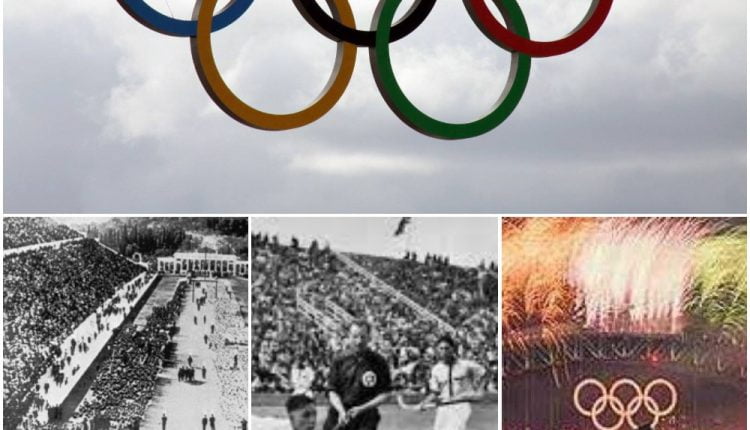 Modern Olympics started in Athens in 1896 and except for the two World Wars, the Games have never been stopped.

The COVID-19 pandemic almost derailed the 2020 Games, which was pushed back to July 2021. However, they will still be known as the 2020 Olympic Games.

Let us go on a trivia journey from the 1st modern Olympic Games to the current one. I have chosen just one or two trivia about each of the Games so far.

1896 Olympics; Athens. We have to thank French aristocrat Baron Pierre de Coubertin and the creator of the International Olympic Committee (IOC) for reviving the Olympics. The 1st modern Games were held in Athens. There were just two winners per event, with the winner getting a silver medal and the runner-up a copper medal. Later the IOC, retro-actively gave the winner a gold medal, the 1st runner up a silver medal and the third-place finisher a bronze medal.

1900 Olympics; Paris. This was the 1st Olympic Games in which women participated. This was also the only Olympic Games in which cricket was an event. There were initially four participating teams, but Belgium and Netherlands opted out. There was only one match between Great Britain and France. GBR won and was given a silver medal while France was given a copper medal. The French team mostly comprised Englishmen based in France. Later the IOC replaced the medals with gold and silver.

There were some more games which were played only at these Olympics. These were automobile and motorcycle racing, ballooning, croquet, basque pelota, 200m swimming obstacle race and underwater swimming.This was also the only Games where live pigeons were used for the shooting event. Thankfully, this was immediately stopped thereafter.

1904 Olympics; St Louis, Missouri. This was the 1st ever Olympic Games in the US. The current format of gold medals, silver medals and bronze medals started from these Olympics. There was a conflict between Chicago and St Louis as to where the Olympics would be held.

Factually, the Games had been awarded to Chicago, but the St Louis administration said that they would continue to have their extended and scheduled sporting event and the Olympics would be overshadowed.

Baron Pierre de Coubertin stepped in to mediate and his decision to award the Games to St Louis was accepted. However, the President of the USA did not attend the Games, which were opened by the Mayor of St Louis.

1908 Olympics; London. The original venue was Rome, but Mount Vesuvius erupted in 1906 and more than 100 lives were lost and it was not felt possible to hold the Olympics in Rome as funds had to be diverted for reconstruction. London stepped in and held the longest ever Olympics which lasted for 187 days.

1912 Olympics; Stockholm. Japan became the 1st Asian country to participate in the Olympic Games. The Stockholm Games were the last Olympics to give solid gold medals to the 1st prize winners.

1916 Olympics; Cancelled due to World War 1. It was supposed to be held in Berlin.

1924 Olympics; Paris. The Olympic motto of Citius, Altius, Fortius (Faster, Higher, Stronger) was used for the 1st time at the Paris Olympics. Paris became the 1st city to host the Olympic games twice.

1932 Olympics; Los Angeles. The Olympic Village concept started for the 1st time during the 1932 Games in Los Angeles.

1936 Olympics; Berlin. The Olympic torch relay started for the 1st time during the 1936 Games. Hitler wanted the Games to be a symbol of Nazi supremacy. It was given a big jolt by Jesse Owens who won 4 gold medals which was an unprecedented feat. One of the hallmarks was the exhibition of Olympic spirit by German Luz Long who helped Jesse Owens with technical advice during the Long Jump. However, an Olympic historian says that this was a myth. A historically documented fact however is that the two rivals embraced in front of Hitler. Luz Long died in World War II and he also wrote a letter to Owens, asking him to find his son and “tell him what things can be between men on this earth.”

1940 and 1944 Olympics; Cancelled. They were supposed to be held in Tokyo and London respectively.

1948 Olympics; London. London became the 1st city to host the Olympic Games twice. These Games were called the Austerity Games as they were held after the World War. This was the 1st Games in which the opening ceremony was broadcast live by the BBC.

1952 Olympics; Helsinki. This was the 1st Games in which the Soviet Union and the People’s Republic of China (PRC) participated.

Technically, the Soviet Union had been invited for the 1948 Games as well but they preferred to send observers to learn, and they participated for the 1st time from 1952 onwards. PRC sent only one swimmer. They did not participate again till 1984.

1956 Olympics; Melbourne. This was the 2nd Olympics after the 1920Antwerp Olympics that an Olympics were held in more than one country.

The horse-riding events were held in Stockholm, since Australia had a 6-month quarantine policy for horses. PRC started boycotting due to the participation of Taiwan.

1960 Olympics; Rome. Muhammad Ali, then known as Cassius Clay, won the gold medal in the light-heavyweight category. In hockey, India’s unbeaten run since the 1928 Olympics was broken by Pakistan.

1968 Olympics; Mexico City. This was the 1st Olympics in Latin America. The 200-metre presentation ceremony saw Black American athletes, Tommie Smith and John Carlos, stage a protest for civil rights by raising black-gloved fists and wearing black socks instead of shoes. The IOC banned them for life. The silver medallist, Australian Peter Norman, wore an American human rights badge as support for them on the podium. Reportedly, he was punished by dropping him from the 1972 Australian team.

1972 Olympics; Munich. This was the 1st Olympics to have an official mascot, which was the dachshund Waldi. This games was showcased as the “Cheerful Games” but sadly will always be remembered for the Munich massacre, which was the killing of 11 Israeli athletes and coaches and a German police officer by Palestinian Black September terrorists.

This Olympics will also be remembered for Mark Spitz winning 7 gold medals in swimming (and breaking the World record in all 7).

1976 Olympics; Montreal. This had the best ever boxing contingent from the USA. 5 American boxers won gold medals and 4 of them went on to become professional world boxing champions. These 4 are Michael Sphinx, Leon Spinks, Sugar Ray Leonard, and Leo Randolph. The 5th gold medallist was Howard Davis Junior.

This is the only Olympics where one of the lady competitors was exempted from the sex test. The participant was none other thanPrincess Anne of the British Royal family who participated in a horse-riding event.

1980 Olympics, Moscow; As many as 66 countries, led by the USA, boycotted these Games. The reason was the Soviet-Afghan war.

1984 Olympic Games, Los Angeles. In retaliation to the American-led boycott, 14 countries led by the Soviet Union boycotted these Games, which are considered to be commercially the most successful Olympic Games of all time. The football event was surprisingly successful as well, and this was motivated the USA to bid and successfully host the 1994 Fifa World Cup. It was in the 1984 Olympics that Carl Lewis emulated Jesse Owens.

1988 Olympic Games, Seoul. The 1988 Olympics was mostly boycott-free with only North Korea and Cuba boycotting the Games, amongst important countries. Tennis made a re-entry and Steffi Graf became the Golden Girl by winning the gold medal as well as the four Grand Slams. Miloslav Mecir won the men’s tennis gold medal. My lasting memory of the 1988 Olympics is Greg Louganis winning back to back diving gold medals despite striking his head on the springboard and suffering a concussion in an earlier round.

1992 Olympic Games, Barcelona. This was the 1st totally boycott-free Olympic Games since 1972. In Basketball NBA stars were allowed and the USA fielded a dream team including Michael Jordan, Magic Johnson, Larry Bird and others. In these Games, a referee error saw two gold medals in synchronized swimming. This was as the referee punched 8.7 instead of 9.7 and that took the swimmer, Sylvie Frechette to second place and Kristin Babb-Sprague to 1st place. She appealed and the error was found, and the International water sports federation, FINA, took the unusual step of awarding both Sylvie and the lucky Kristin gold medals.

1996 Olympic Games, Atlanta. The schedule of the games was fixed at 17 days. Since 1996, every Olympics has been for 17 days. 1996 also saw for the 1st time Summer and Winter Olympics being separated, in alternating even-numbered years. Andre Agassi won the tennis gold medal to become the 1st man to win the Golden Slam. For India, Leander Paes won the bronze medal by defeating Fernando Melligeni after being down a set and facing breakpoint in the second set.

2000 Olympic Games, Sydney. This was marketed as the Millenium Games and are generally accepted to be one of the most successful and well organized Olympics. If we go back to Melbourne, 1956, we remember that horse-riding events had to be conducted in Sweden. Improved medical tests ensured that the 260 horses which came could enter Australia, with a strict condition that they could not leave Sydney.

Something unique about the Sydney Olympics was that Cathy Freeman lit the Olympic flame, and she went on to be the gold medallist as well (400m race).

2004 Olympic Games, Athens. For the 1st time, the Olympic flame travelled throughout the world before coming to the host city. Michael Phelps started his extraordinary Olympic journey here by winning 6 golds and 2 silver medals.

2008 Olympic Games, Beijing. China used these games to showcase their arrival on the World scene. Phelps continued his adventure. He won 8 gold medals. Usain Bolt exploded in this Olympics with 3 gold medals, in the 100m, 200m and the 4x100m relay. However, 9 years later, the 4x100m relay medal was taken away following the disqualification of his teammate Nesta Carter for a doping violation.

2012 Olympic games, London. These games were an extraordinary success as well and fully justified their motto, “to inspire a generation”. London became the 1st city to host the Olympic thrice. Phelps won 4 golds and 2 silver medals to take his medal tally to 22 while Bolt repeated his feat of 2008.

2016 Olympic Games Rio de Janeiro. The games were successfully conducted amidst fears of the Zika virus. Great Britain with 27 Gold medals overtook China (26) to be at the second spot, while the USA was comfortably in 1st place with 46 Gold medals. Phelps once again won 5 gold medals and a silver medal to become the most successful sportsperson of an Olympic Games for four Olympic Games in a row. He ended his career with 28 medals, including 23 gold medals. This is more than 161 countries. Amazing indeed. Bolt too repeated his feats of the previous 2 Olympics to win 3 gold medals.

2020 Olympic Games – Tokyo, These were held after a postponement of a year but the Games are still branded as the 2020 Olympic Games. It is a tribute to the organisers and all the participants that the Games could be held amidst a global pandemic. Sadly, the Games were without spectators, but that was a must and a better alternative than cancelling the Games altogether. Congrats for keeping the Olympic movement alive, even amidst this dreaded pandemic.

May the Olympic movement continue forever.