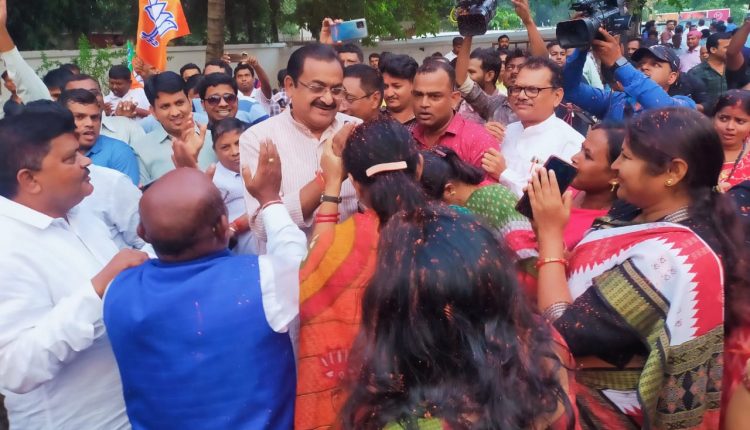 Bhubaneswar: Riding high on victory in Dhamnagar byelection, Odisha BJP on Sunday said it was confident of repeating its performance in Padampur in Bargarh district.

Speaking to media persons after its candidate Suryabanshi Suraj was declared winner in Dhamnagar in Bhadrak district on Sunday, state president of BJP Samir Mohanty said today’s results will prove a watershed in the political history of Odisha. “It is a historical moment in the electoral politics of the state. The BJP has emerged as a strong alternative to the ruling BJD,” he said.

Stating that his party will adopt the same strategy in the byelection to Padampur Assembly constituency, Mohanty said it would continue to follow positive politics by highlighting the development vision of Prime Minister Narendra Modi.

In order to further strengthen the party organisation at grassroots level, he said the BJP’s doors are always open to the dissidents. “We want to project BJP as a strong and united party unlike others which have to constantly grapple with rebels and dissidents. We want to send the message to the electorate that BJP can ensure a stable and reliable government in Odisha as at the Centre,” he added.

The byelection to Padampur will be held on December 5 and its results declared on December 8, according to the Election Commission of India (ECI) announcement.

The bypoll was necessitated following the demise of senior BJD leader and five-time MLA Bijaya Ranjan Singh Bariha, who passed away at a private hospital on October 2. Bariha was elected to the Assembly from Padampur for five times, including twice on Janata Dal ticket in 1990 and 1995, and three times as BJD nominee in 2000, 2009 and 2019.