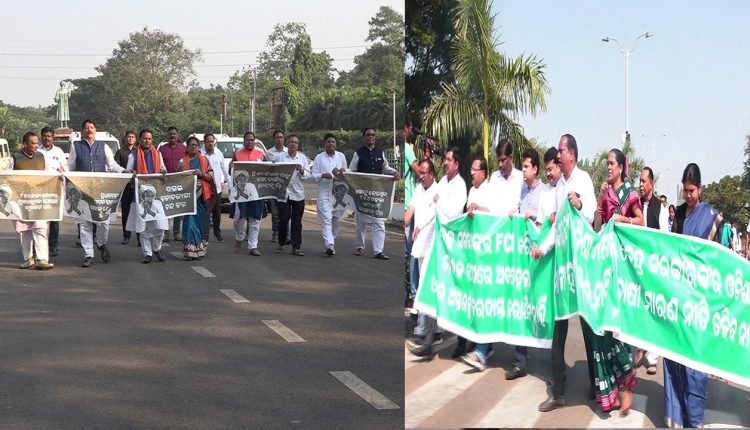 Bhubaneswar: Politics over farmers’ issues reigned supreme ahead of Padampur Assembly bypoll in Odisha as both ruling BJD and opposition BJP staged protest and took out rallies in Bhubaneswar on Friday demanding early payment of crop insurance dues and input subsidy.

Soon after the Assembly was crippled and adjourned following uproar over farmers’ issues, the legislators of both the political parties took out separate rallies and marched to Raj Bhavan to petition the Governor for early fulfillment of their demands.

Ruling BJD MLAs, including several Ministers, first staged a dharna near Mahatma Gandhi’s statue on the Assembly premises and then marched to Raj Bhaven carrying banners and posters to press for hike in the minimum support price (MSP) of paddy.

Coming out of Raj Bhavan, senior BJD legislator Sashi Bhushan Behera told reporters that a unanimous decision was earlier taken in the Assembly for raising the MSP of paddy to Rs 2930 per quintal, but the Centre is yet to meet the demand.

Apart from demanding immediate hike in the MSP, BJD also wants quick payment of crop insurance claims of farmers and steps to ensure proper lifting of rice from the state by Food Corporation of India (FCI), he said, adding that the Centre should also ensure adequate supply of fertilisers for Odisha farmers.

Similarly, BJP legislators also took out a rally holding banners and posters to Raj Bavan after staging a protest on the Assembly premises.

Senior BJP leader and opposition chief whip Mohan Majhi said the party demands that input subsidy be provided to all farmers who have lost crops due to drought in Odisha. Input subsidy should be paid to the farmers by the state government without any further delay, he said.

Blaming the state government for the delay in payment of crop insurance claims to farmers in the state, Majhi alleged that utter mismanagement is witnessed in the mandis.

The protesting BJP members carried banners with slogans like “stop weight cuts of paddy in mandis”, “state government is doing dalali for millers”,  and “stop illegality in registration of farmers” and “give farmers’ list to the centre for PM Kissan Yojana”.

It may be noted here that both BJD and BJP have been raising the problems of farmers in the run up to the by-election to Padampur Assembly segment in Bargarh district which is scheduled to be held on December in an apparent bid to woo the farming community.