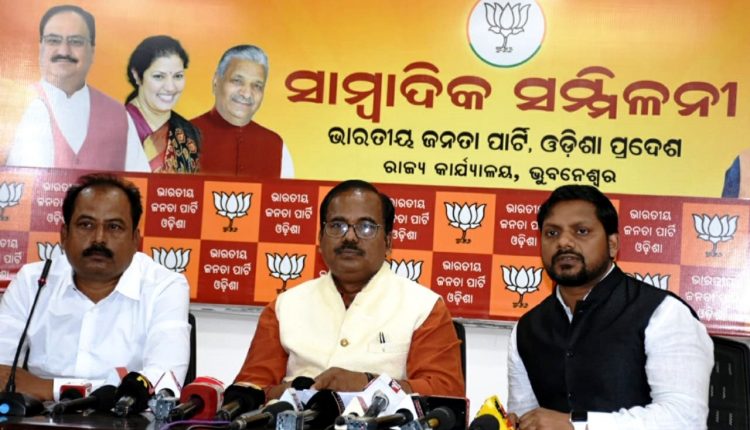 Bhubaneswar: BJP launched a scathing attack on the BJD government in Odisha on Thursday accusing it of causing delay in Other Backward Classes (OBC) census in the state.

Addressing a press meet in Bhubaheswar, Odisha BJP’s OBC Cell president Suratha Biswal said that party leaders have met the state OBC Commission several times to press for steps to conduct  a survey in the state, but their efforts have failed to yield any result.

Noting that people belong to OBC and Socially and Educationally Backward Classes (SEBC) constitute more than 54 per cent of the state’s population, the BJP leader said the state government must provide them their constitutinoal rights by ensuring job reservation.

Claiming that the state OBC Commission appears to be helpless, he said the state government seems to be ignoring the panel’s  requests.

In view of the OBC Commission’s helplessness, BJP leaders had approached the SC & ST department and the Chief Secretary with a memorandum, Biswal said, adding that the state government is yet to take any concrete steps for a survey.

The BJP leader warned that that the party along with all the OBC people of the state will launch an agitation and gherao the  Assembly building if the government further delays the survey.

States like states like Bihar, Madhya Pradesh, Maharashtra and Uttar Pradesh have conducted OBC census, he said, adding that the Supreme Court has also ruled that local elections cannot be held without reservation for OBCs.

He said the state government had told the Orissa High Court before the last panchayat and urban bodies polls that it had no data on the OBC population even though it was believed that 54 per cent of the state’s population or around 2.5 crore people belong to the category.

Similarly, the state government has a list of 209 castes in OBC category, the BJP leader claimed, seeking immediate steps to conduct OBC census in the state.