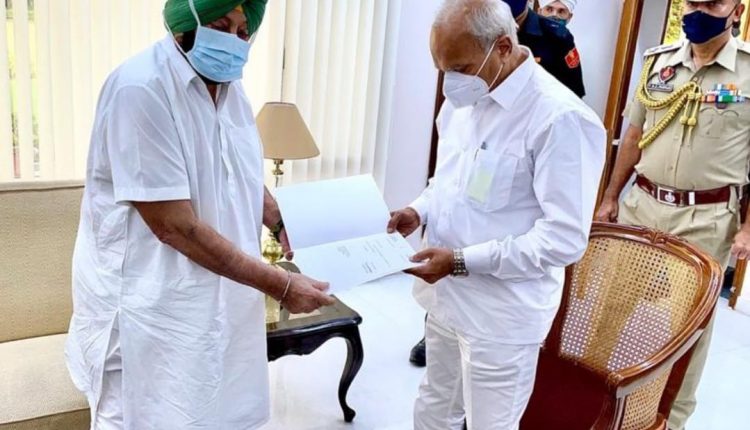 Punjab: The speculation surrounding a change of guard in Punjab ended with embattled Chief Minister Amarinder Singh submitting his resignation to Governor Banwarilal Purohit at 4.30 pm on Saturday, ahead of the meeting of Congress party legislators.

Amarinder’s son Raninder Singh earlier tweeted: “… I am proud to accompany my father to Raj Bhawan when he submits his resignation as CM of Punjab and leads us as head of our family into a new beginning et all.”

According to sources, the party high command decided to effect a change of guard in Punjab ahead of assembly polls early next year as factionalism again surfaced in the state unit with sections opposed to him requesting a meeting of the Congress legislature party (CLP).

Also Read: Is Change Of Guard In Punjab On Anvil Today?

The Congress had called for a CLP at 5 pm.

Earlier in the day, Amarinder spoke to Congress president Sonia Gandhi and expressed his anguish and displeasure over being repeatedly “humiliated”.

“I feel humiliated… after being in politics for 52 years,” the Captain said.

The resignation of the Captain, who has been chief minister for over nine years, comes amid the bitter political tussle with cricketer-turned-politician Navjyot Singh Sidhu. As Amarinder lost support among the MLAs, Sidhu rose in stature and was appointed as chief of Congress’ Punjab unit in July.

Though not an MLA, former Punjab unit chief Sunil Jakhar may also be considered for the chief minister’s post for being a prominent Hindu face of the party, The Week reported.

Assembly elections In Punjab are due in five months’ time.

Earlier, the BJP had replaced Vijay Rupani, the chief minister of poll-bound Gujarat. BS Yediyurappa in Karnataka and Tirath Singh Rawat in Uttrakhand were also asked to resign.