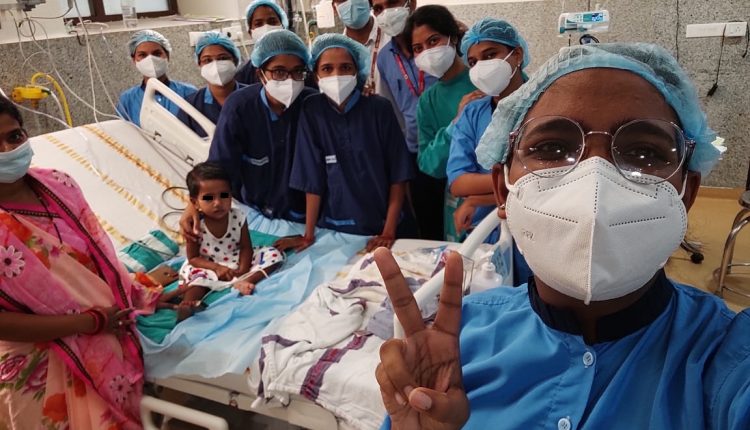 Bhubaneswar: Here’s some good news amid the COVID gloom. A 22-month-old girl of Odisha’s Dhenkanal district has recovered from post-COVID complications after undergoing treatment with Extracorporeal Membrane Oxygenation (ECMO) support at AIIMS, Bhubaneswar.

She was discharged with a litre of oxygen from the premier medical institute on Saturday.

“When the baby was admitted to the hospital about one and a half months back, she was breathing heavily and needed 15 to 20 litres of oxygen. Her oxygen saturation level was 70 to 80 per cent. The initial medication also did not work,” Associate Professor in Pediatrics Dr Krishna Mohan Gulla, who treated the girl, told Odisha Bytes.

The baby had contracted COVID-19 about three months back.

Dr Gulla said the baby was suffering from Pulmonary Alveolar Proteinosis, a rare disease of the lungs. “As a result, surfactant protein was getting deposited in her lungs. We had to go for whole lung lavage (WLL) therapy. During this procedure, a patient is generally put on a ventilator. Since her condition had worsened, we held discussions with specialities at AIIMS-Delhi and decided to wash her lung by putting her on ECMO support,” he said.

The doctor said the baby was put on ECMO support for around 26 hours for the 4 to 5 hours procedure, during which saline (saltwater) solution was used to wash out the lungs, at the end of August. The second WILL was carried out about 5 to 6 days back without the support of the ECMO machine, he said.

“At the time of the discharge, she was breathing comfortably and oxygen saturation level was 97 to 98 per cent,” he added.

According to sources, the 22-month-old girl is the youngest child in the nation to have been put on ECMO that pumps and oxygenates a patient’s blood outside the body, thus allowing the heart and lungs to rest.

On July 15, Director Dr Gitanjali Batmanabane had inaugurated the ECMO unit at AIIMS with two machines and the first ECMO service was used on the baby, the sources added.