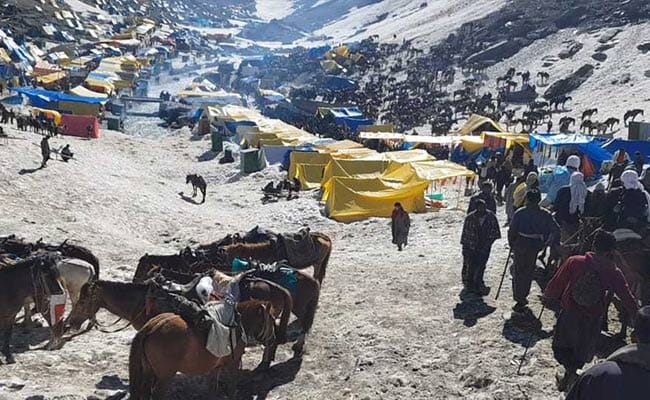 New Delhi: The Amarnath Yatra was put on hold on Sunday after the Srinagar-Jammu National Highway was closed for traffic due to mudslides at Ramban and Banihal.

The nearly 300-km long highway was closed on Saturday also after heavy rain triggered mudslides at several places, stranding hundreds of commuters, including pilgrims, on the route.

Officials said any decision to resume the yatra will be taken later in the day based on the weather condition. Nearly 1,000 pilgrims who had reached the cave shrine situated at an altitude of 3,880 metre in south Kashmir were allowed to offer prayers in the morning, they said.

“To avoid any incident, no pilgrim was allowed from the three main base camps—Bhagwati Nagar in Jammu, Nunwan-Pahalgam in Anantnag district and Baltal in Ganderbal district—Sunday morning,” a yatra official said.

The helicopter service was also suspended for the day due to bad weather, the official added.

Notably, over 3 lakh pilgrims have visited the cave shrine since the annual pilgrimage started on July 1. The yatra will end on August 15.

This year, 33 people including 29 pilgrims, two volunteers and two security personnel have died, mostly due to natural causes, during the yatra.