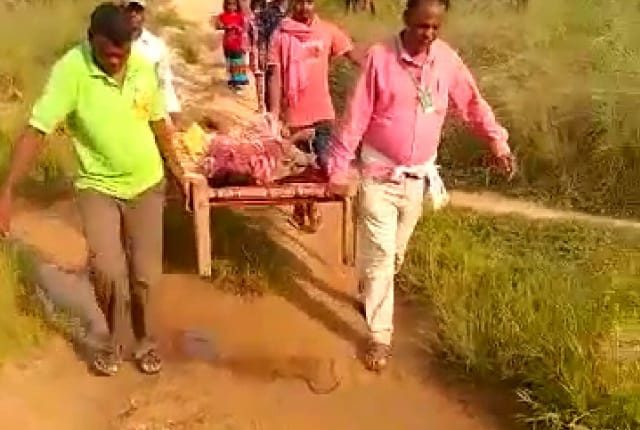 Bargarh: An ambulance driver went beyond the call of duty to help a woman in need of emergency care after bad roads prevented him from driving the vehicle to the doorstep of the patient in Odisha’s Bargarh district.

The ambulance driver, helper and pharmacist walked a kilometre to examine a patient and then carry her on a cot to the ambulance.

A woman, Subhasini Paik of Nuhuripada village under Kangsada panchayat in Paikmal block of Padmapur took seriously ill following which the family called 108 for shifting her to the nearest medical.

Though the ambulance reached the village, they could not enter it and reach the house due to pathetic road condition. Considering the patient’s condition, ambulance driver Uddhav Sandha and pharmacist Gokulan decided to walk one km to the patient’s house.

After a primary check-up, they teamed up with the villagers and helped Sushil Kumbhar and shifted Subhasini to the ambulance about a kilometer from the house. She was taken to the hospital in time.

Environmental Award For Prof SK Behera Of SOA In Bhubaneswar