An Odia Woman Writer’s Voyage In And Out 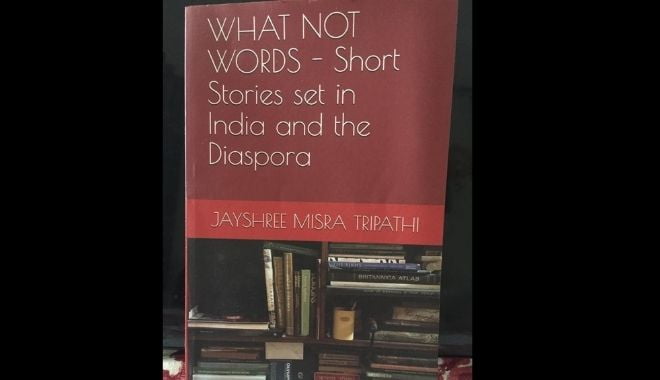 Jayshree Misra Tripathi is a Delhi-based Odia writer who writes in English. Primarily a poet, she works in prose too. Given her cross-cultural journeys flavoured by her perspective as a sensitive and cultured woman, she was bound to reach for the medium of the short story for a more elaborate recounting of her trips, trials and tribulations. Mercifully this has happened recently. What Not Words, her debut book of short stories, proves yet again that stories really cut closer to the bone when there is the weight of personal experience behind them. Lived reality is the very stuff of literature. It is the key to good writing doubling up as good evidence.

We are talking about a different kind of evidence, though, one that involves the ‘sensorium’, sharpened enough ‘to catch every note and trick’, as a Henry James would say, and verbal flair rather than being the work of data and statistics. Jayshree’s stories seem to have both. They tell us about what it means to be a woman in a male dominated setting and also in that somewhat exciting and perilous borderland between home and abroad.

The criterion of ‘felt experience’ works as a touchstone, helping us to zero in on the authentic in Jayshree’s book of stories.  Strange as it may sound, the stories in the middle section, set in the diaspora, and the ones in the third and last section, set in a citified milieu, seem more authentic. This is to not to say that the five Indian stories in the first section of the book are inauthentic. Having been written over twenty years ago, they may not have received the benefits of the maturation process that comes with time, practice and experience. The two which work, at least for this reviewer, are “Daughter” and “Soulmate.” In terms of character and setting these two have taken a decisive step outside of a relatively less known and cloistered pre-modern world. The mother in “Daughter” is a lecturer who has to juggle the demands of (mis)guiding her daughter and grading her scripts. The couple in “Soulmate” is an urban, late twentieth century couple with a modern gadget – Cable TV – mediating between them and providing a connection that is tenuous at best.

The benefit of the maturation process is, however, amply evident in the three diaspora stories, spanning a morning, an afternoon and an evening in foreign lands, and three stories of return and homecoming that follow.  The writer seems to be in her elements when she  trains her guns on an overseas setting — and one that is metropolitan, modern and literate, to boot. Her art seems to come alive, imbuing the stories with wit, charm, and nuance. Some of the stories in these two sections are simply A-list and I could not help but feel that they have been wasted in their current publication format. These stories, though rendered in modern idiomatic English, are Indian and Odishan in feel and ambience with a credible cross-over woman character, who is also the I-narrator.

One story from the last section especially stands out: “The Legacy of a Distinguished Citizen of India.” Perhaps an analysis of this one story will show the story writer’s complex and multifaceted art off to advantage. It is a classic story of love and betrayal in the format of a gripping thriller. An Indian ambassador, who goes by the sobriquet of ‘Distinguished Citizen of India’, is reported killed in an explosion in his overseas location while his wife is away in her husband’s home in Bhubaneswar. The will of her husband that surfaces in his home is a strange one, instructing his wife to spend 100 days – an echo of Garcia Marquez’s cult novel here – in his house, taking stock of his massive collection of books so that the wife – Durga – gets to be able to donate their home and sprawling garden to a charitable organisation of her choice.

Her long time friend – Maya – steps in here. She runs a charity. Maya has just been separated from her husband – Dilip – who happened to be a friend of the assassinated official, and, who had vied with his supposedly dead friend, Shiv, for the love of Durga in their student days at Delhi University several decades ago.  Shiv had won that round, winning Durga and marrying her. He had also beaten Dilip socially by making it into the elite Foreign Service while Dilip had to settle for the less glamourous Research and Analysis Wing.

Time’s whirligig did, however, turn. A secret affair develops between Shiv and Maya in later years, leading to the weaving of an elaborate plot on their part to stage Shiv’s death so Durga can be emotionally blackmailed into willing away his home, her husband’s legacy, to her best friend Maya. The ending of the story is like a punch in the solar plexus: “Maya smiled. She had come home. There was Shiv with two steaming cups of coffee. Their plan had worked. The official brief was that the pirates had captured him but welcomed his ideas on maritime policy. They released him without a ransom or a scratch on his body” (65).

The story, even in its bare bones, is fascinating. Add to that Jayshree’s subtle work of interpolating long ‘reminisces’ about Delhi University student life in the 1970s – with a girl from Odisha an oddity there – and the unobtrusive use of stream of consciousness narration, and the richly layered texture of the story  can easily be inferred. Another hallmark of Jayshree’s art is to find suitable epigraphic illustrations for her stories. This story, for instance, has a quote from T.S. Eliot’s The Cocktail Party about how ‘at every meeting we are meeting a stranger’, which is bull’s eye on the theme of flux and betrayal.

What Not Words is a gripping read. Writing her fine stories about India and overseas while skilfully weaving fragments of her autobiography into them, she has succeeded in being much more than an ‘arranger of words.’ Jayshree Misra Tripathi is a new name to be counted among the front runners of Odia English writing.

Himansu S. Mohapatra is former professor and head of the department of English, Utkal University and a noted translator.