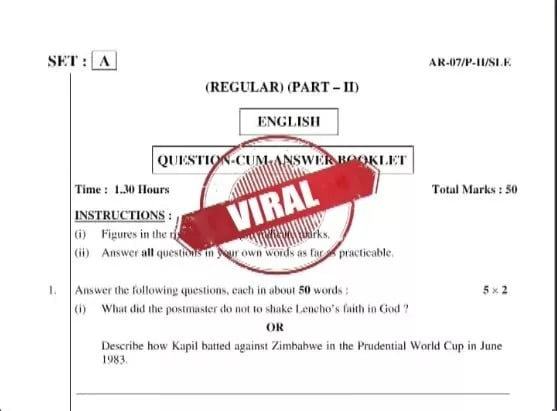 Sources said that the English Set-A question paper was circulated on WhatsApp in Balangir town 15 minutes into the examination being conducted by the Board of Secondary Education (BSE).

The incidents were also reported from Saintala and Patnagarh block in Balangir district.

However, the authorities of the Board of Secondary Education (BSE) maintained that the question paper circulated on social media is ‘fake’.

“We have verified the viral question with that of the original question paper and found that there has been no leakage of English question paper. Some people with an ulterior motive to malign the Board are doing such mischief,” BSE president Dr Jahan Ara Begum told mediapersons here.

She also advised the students to appear in the examination without any tension.

After the Odia question paper went viral on Friday during the exam, the BSE had suspended 11 teachers and centres’ in-charge and lodged FIRs against nine of them. Seven teachers have also arrested for allegedly circulating the question papers on social media.

Meanwhile, the Bandhugan police station in Koraput district registered cases against the centre superintendent and a teacher of Bandhugan High School on Monday on the basis of the complaint lodged by the district education officer (DEO). The DEO in his complaint has alleged the involvement of the duo in the leakage of the MIL Odia question paper.

Matric Exam Papers Evaluation In Odisha From May 26