Another Wanted Criminal Injured In Police Encounter in Choudwar 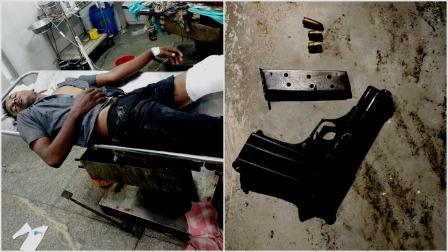 Choudwar: Continuing it’s crackdown against anti-socials, the Choudwar police nabbed another wanted criminal in the wee hours of Monday.

The injured criminal has been identified as Muna Dehury (24) of Gundichapur village in Kankadahada block under Sadar police limits in Dhenkanal district.

Acting on a tip-off that the Muna was on his way to Dhenkanal from Nuapatna via Choudwar-Dhabaleswar Road, a special team of Choudwar police station led by the IIC raided the area. As the team tried to apprehend Muna, he opened fire on the cops. But he was hit by a bullet in his left leg in the retaliatory firing.

Police later arrested him and seized a 9 mm country-made pistol, one magazine, one live ammunition, two empty cartridges and a bike from his possession. He was then admitted to SCB Medical College and Hospital in Cuttack.

According to police, Muna had looted cash and gold from one Lala Lalit Singh near Nuapatna rice mill on September 24. Singh, who was shot in the head by Muna and his gang members, died at the SCB, two days after the incident.

During the investigation, police had come to know about the complicity of Muna and his gang members in the incident.