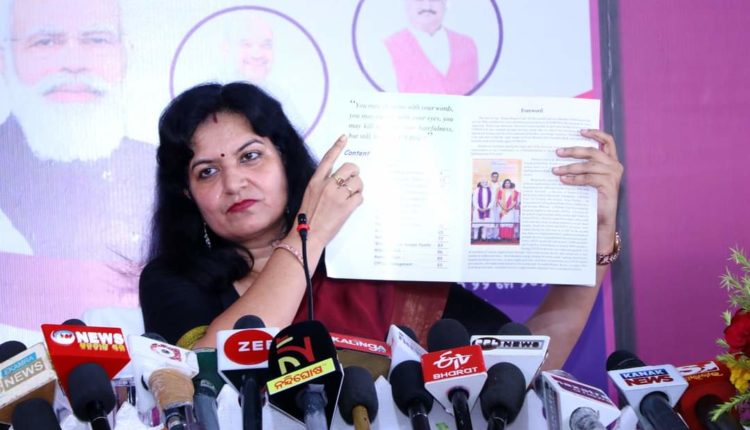 Bhubaneswar: Bhubaneswar MP Aparajita Sarangi submitted the annual report card before the people of her constituency for the second consecutive year, on Monday.

With MPLAD being discontinued amid the COVID pandemic, the MP mobilised funds from Corporate Social Responsibility (CSR) head worth Rs.96 lakh for the solar light system at Ugratara Temple, one of the oldest popular Shakti Pitha, construction of a large number of drains and culverts. She also grounded Rs 114 crore NHAI projects, which included a flyover at Hanspal, 3 vehicle underpasses and 3 overbridges, a press release said.

Due to her intervention, two underpasses at Mugpal and Barabati in Jajpur district by NHAI could materialise, it added.

The release further said that the MP office focussed on the redressal of public grievance during the past one year. “A total of 2150 grievances were received and 2106 of them were redressed. Besides, 10 health-related cases requiring huge financial assistance were recommended by the MP for assistance under Prime Minister National Relief Fund (PMNRF) and Rs.22 lakh was received by the patients,” it said.

The MP, who had 100 per cent attendance in the Budget Session this year, said that she believes in building networks and forging partnerships while giving people a common platform to think and work together for a resurgent society.

“Keeping this objective in view, a couple of non-political organizations duly registered under the Societies Registration Act, 1860 and the Indian Trust Act, 1882 were created. AJITA – Women’s Organization stands tall with around 10,000 members; Youth For Action (YFA) boasts of around 5000 members till now.  Besides these two, SAMARTH a society of senior citizens, intellectuals and professionals; and BHARASA a Welfare Trust for extending financial support to the needy, deserve special mention. Annapurna – a Welfare Trust for feeding the hungry and Ama Paribar have also been set up,” it said.

Aparajita is perhaps the only MP to be listing out works done by her during a year. While presenting her first report card on completion of her first year as a Parliamentarian, shed had tweeted that she would do it every year during Rath Yatra.

Know What Aparajita Sarangi Has To Say About Induction Of 2…