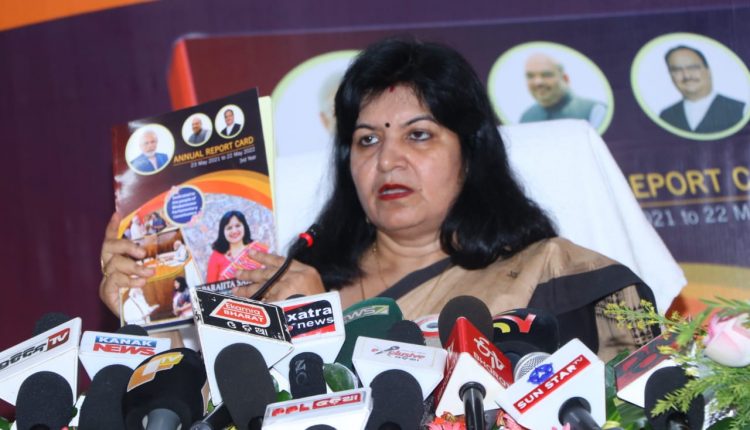 Bhubaneswar: BJP MP from Bhubaneswar Aparajita Sarangi on Saturday released a 96-page annual report, highlighting her work as a Parliamentarian since May 23 last year.

The report laid emphasis on developmental work, hearing of grievances and their solutions and reaching out to common people in the past one year. “A sum of Rs 6,473 crore has been spent for the development of National Highways which includes Rs 261.47 crore for 10 flyovers, Rs 301.6 crore for 28 Vehicle Under Passes (VUPs), Rs 9.5 crore for four Foot Overbridges (FOB), Rs 5744 crore for Capital Region Ring Road (111kms) and Rs 157.47 crore for Khurda Bypass Road,” Aparajita told a presser.

The MP said that the Centre had sanctioned funds for 3,909 pucca houses under Pradhan Mantri Awas Yojana and 3,574 among them have been constructed. Besides, piped water supply has reached 1,27,123. “Efforts are underway to provide water through pipes in the remaining 93,862 houses. Work is also in progress to provide drinking water supply to each house through Mega Piped Water Supply Project for which Rs 1380.25 crore has been sanctioned,” she said.

“So far, 5,545 of 6,166 registered complaints have been heard. That apart, Rs 83, 24, 500 has been spent on the treatment of 32 persons under the Prime Minister National Relief Fund and another 252 people have been provided assistance of Rs 10 lakh through Bharasa Kalyana Panthi,” she said.

Aparajita said that she participated in 653 debates on various channels as the national spokesperson of the BJP.  “I also took part in 26 debates and tried to sort out different issues through 124 questions in Parliament sessions,” she further said.

She said that plans are afoot to develop Bolgarh and Lingaraj Temple Road passenger halt apart from Bhubaneswar railway station. “Also, efforts are to restore Prachi river,” she added.

Anti-Smuggling Guard With Unaccounted Assets Worth Over Rs 1.4 Cr Arrested In Odisha’s Balasore