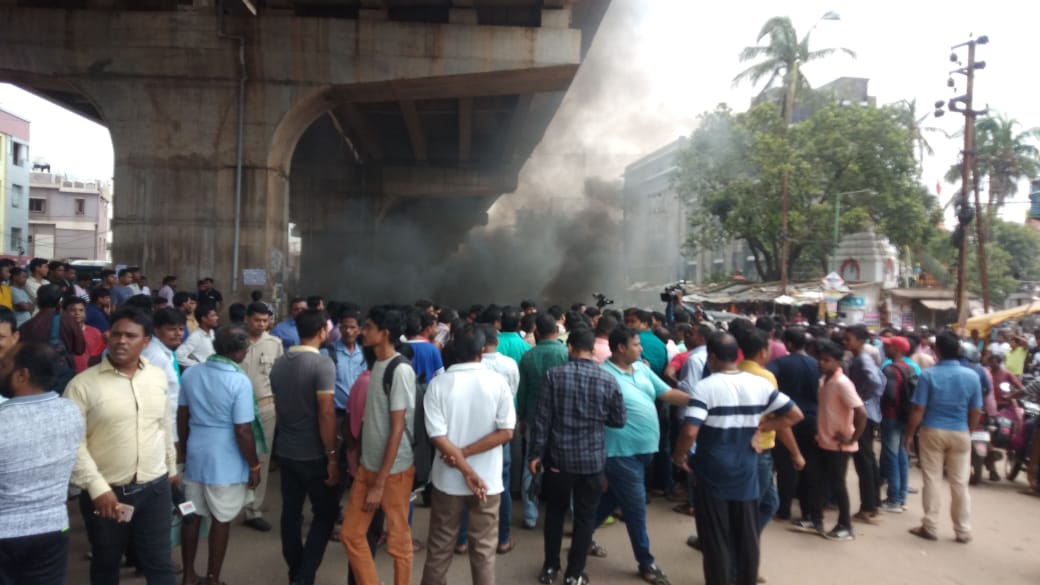 Bhubaneswar: Tension ran high at Rasulgarh on Wednesday as irate locals blocked the national highway disrupting vehicular traffic between Bhubaneswar-Cuttack and Cuttack-Puri route. They were demanding immediate arrest of the miscreants involved the attack on a hotelier here late on Tuesday.

They withdrew the blockade after Twin City Police Commissioner Satyajit Mohanty rushed to the spot and assured the agitators of quick action.

Talking to the media, Mohanty said that they will have another round of discussion with the members of the youth associations of Mancheswar in the afternoon. “Cooperation of the people will help police maintain law and order and curb all criminal activities, including drug peddling in the city,” he added.

Asked about the step being taken to nab the miscreants involved in the four loot cases in the city, he said investigation is on and the culprits will be arrested soon.

While the first loot incident occurred in broad daylight near Mancheswar railway station where three miscreants decamped with cash and ornaments from a woman Suprava Rath and her husband Umakanta Mishra, a railway employee, a retired bank officer was robbed of his gold ring at Adimata Colony and two other incidents were reported at Rasulgarh on Tuesday night.

According to sources, five motorcycle-borne masked miscreants arrived at a second-hand vehicle showroom on Bhubaneswar-Puri bypass road. They barged into the showroom and looted cash worth Rs 1.80 lakh from two customers at gunpoint. One customer was seriously injured in the attack while trying to resist them.

On being informed, a PCR van rushed to the showroom and admitted the injured customers to the Capital Hospital.

A few hours after the incident,  a hotel owner was seriously injured in the attack by a gang of four robbers at Rasulgarh late in the night.

The victim was identified as Bulu Samantray, owner of Trupti Hotel at Rasulgarh. He was on his way home when four bike-borne miscreants intercepted him near Rasulgarh Square and attacked him with sharp weapons before fleeing with cash and ornaments.

Soon after the incident, Mancheswar police rushed to the spot and admitted Bulu to the Capital Hospital. His condition is stated to be critical, the sources added.

Cop Suspended For Seeking Protection For Policemen In Odisha!