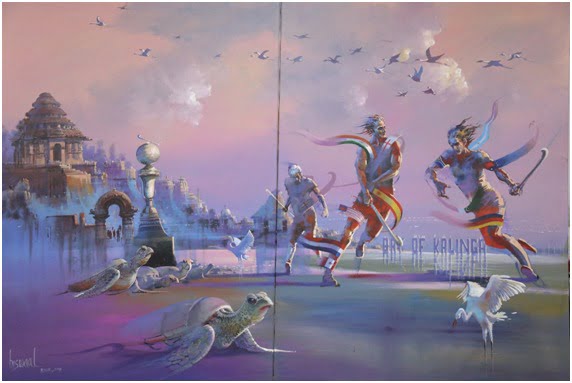 A total of 30 artists and painters from all over India attended the six-day event from October 1 to 6.

The artists worked on paintings on the theme of hockey. These will be put on the premises of the Kalinga Stadium for beautification of the common areas, lobbies, lounges, galleries and dressing rooms.

While some artists reflected on the theme through their creative eye, some other submissions were centered around the overall spirit, ideals and values of sportsmanship. Some paid homage to the legendary Indian hockey player, Major Dhyanchand.

The most striking aspect of the exhibition was how some artists blended in the beauty of Odia tribal culture with the spirit of hockey as a sport to create some breathtaking masterpieces.

The dynamic combination of classic, contemporary and modern art was on full display at the exhibition.

The workshop was organised by Lalit Kala Academy in collaboration with Odisha Mining Corporation (OMC).

Diego Maradona, Arguably The Greatest Footballer Of All…