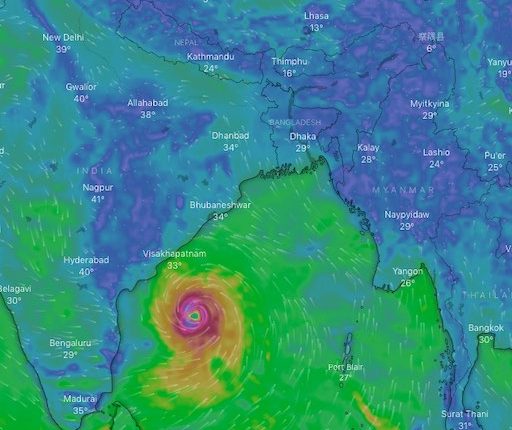 Bhubaneswar: Cyclonic storm ‘Asani’ over southeast Bay of Bengal has intensified into a severe cyclonic storm and was moving in northwest direction.

The national bulletin of India Meteorological Department (IMD), released in the evening, said the cyclonic storm over southeast Bay of Bengal moved nearly northwestwards with a speed of 14 kmph during past 6 hours.

It has intensified into a severe cyclonic storm and lay centered over southeast and adjoining eastcentral Bay of Bengal, near latitude 12.2 degree north and longitude 88.2 degree east at 5.30 pm.

As per the IMD, ‘Asani’ was located at about 610 km northwest of Car Nicobar (Nicobar Islands), 500 km west of Port Blair (Andaman Islands), 810 km southeast of Visakhapatnam (Andhra Pradesh) and 880 km south-southeast of Puri (Odisha).