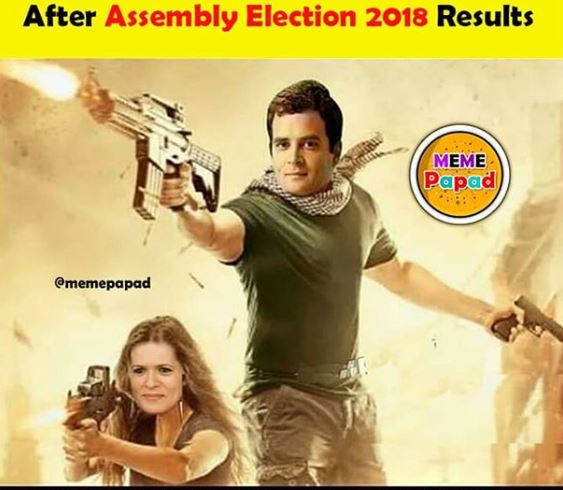 Congress president Rahul Gandhi is often referred to as ‘Pappu’ on social media by right-wing trolls.

Congress leader Shashi Tharoor tweeted, “No wonder the BJP is so upset today. The voters just gave them a triple talaq.”

No wonder the BJP is so upset today. The voters just gave them a triple talaaq.

After 15 years, the grand old party wrested control from BJP in Chhattisgarh, winning 68 of 90 seats. In Rajasthan, it edge out the BJP with 99 seats in the 199-member house. The final results of the Madhya Pradesh assembly election became clear on Wednesday morning, putting Congress as the winner with 114 seats to BJP’s 109. With the support of victorious independent candidates, the party staked claim to form the next government.

Uttar Pradesh Chief Minister, who had campaigned extensively for the BJP during the elections, has also not be spared. Jokes abound taking a swipe at his ‘name-changing’ spree. In one viral meme, the firebrand leader is shown telling Prime Minister Narendra Modi that he would change the meaning of ‘defeat’ to ‘victory’. Another meme showed Adityanath suggesting changing the name of Congress party itself to the ‘BJP’.

One of the viral memes blamed Yogi for BJP’s defeat and the results are like a revenge by Lord Hanuman on Tuesday, for having been given a ‘caste certificate’.

Divya Spandana, who handles social media and digital communications for the Congress, retweeted an old post of Modi from December 2003, and replaced the word ‘Congress’ with ‘BJP’, with a message: “Fixed it for you Narendra Modi ji.”

The then Gujarat chief minister had then said that the results of five states showed the way the wind was blowing and it was beginning of ‘Congress-Mukt Bharat’.

Celebrity author Shobhaa De also took to Twitter to express her thoughts on the elections results.

Not only has Pappu passed, he has earned an instant PhD. Let’s hope he stays the course and doesn’t get distracted. India needs him to see the 2019 Elections through.

Looks like #BJP got Pappu’d three times over today. Congrats @RahulGandhi @INCIndia for bringing democracy back to India 🙌🏾🙌🏾🙌🏾🙌🏾🙌🏾

Congress Manifesto To Be Prepared In Consultation With Experts