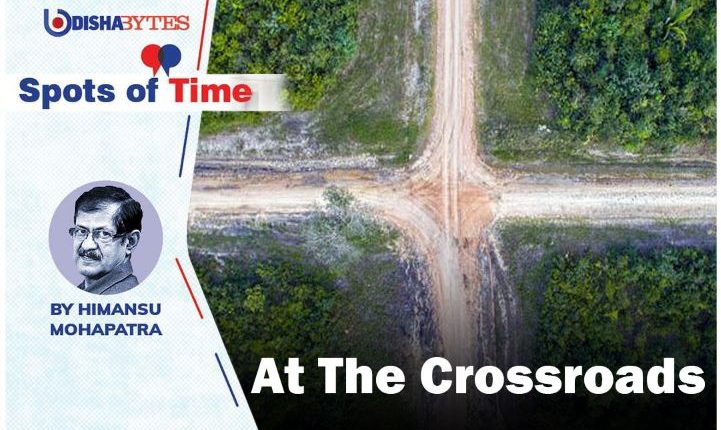 In the waning sunlight before dusk, the bus was crawling up a steep, narrow road that spiralled around the mighty Kalinga Ghat. The side seat on the front right provided a view of the alluringly perilous depths below. How thrilling was the abyss as long as it remained only a spectacle! And what a fatal free fall it would be if the bus tipped over the thin edge?

Subrat wrenched his mind away from such gloomy thoughts. The marriage in Sambalpur was over the day before. The same night he boarded the light blue Orissa Road Transport bus for Berhampur. It was his paternal uncle’s daughter’s wedding. He was obligated to attend. He had done his MA in Sambalpur University and had stayed during the period of study in the home of his paternal uncle and aunt.

This finishing from Sambalpur University had given his career the boost it needed.

He knew that his loyalties were going to face a three-way split from then on — his father’s home in Baripada, the foster home of his maternal grandma, also in Baripada, and recently his uncle’s home in Sambalpur. It was indeed amusing—and a tad ironic—to think of a life paracelled out among three benefactors. To fulfill the aspirations of one benefactor was difficult. And he had three!

To make matters worse, Subrat himself was shuttling between two places, Berhampur where his family was and Bhubaneswar where he had started his new job. As if this was not enough, he was of late becoming aware of irreconcilable differences between his father’s side and his mother’s side. He found himself pulled between conflicting demands, subtly and not so subtly voiced.

There had been an issue a few days before the marriage. It being a weekend, he was home in Berhampur. His uncle had called him on his landline phone to inform him of his daughter’s marriage. The groom was from Bhubaneswar. As custom dictated, the ‘bardhara’ — literally the groom catcher, traditionally a brother to the bride — would head for the groom’s home two days before the marriage and personally shepherd him to Sambalpur for the ceremony. His uncle wanted him to play the role.

Now that was a difficult thing for Subrat to manage when he was shuttling between places. So he suggested to his uncle that he would land up at the groom’s house directly from Bhubaneswar. His uncle had laughed a wry laugh and said, “It doesn’t happen like that, dear boy.. Bardhara has to journey from the point of origin to the point of destination. It is a sacred tradition.”

Subrat couldn’t say anything. He sensed the overwhelming importance of a traditional practice that would brook no short cut or compromise, not to mention infringement.

Surprisingly, however, there had been no further pressure or persuasion from his uncle. So when the time came, Subrat went to Sambalpur for the marriage. There he learnt that another distant cousin from his father’s side had performed the function. The relief he felt was, however, quickly offset by his intuited sense that he had been ruled out because he was not a pure breed.

How often in his growing up days in Baripada had he not stumbled upon signs suggestive of this! Only they expressed themselves in the form of benign differences of opinion on how things were to be done.

“In our family birthday is not observed. We observe ‘padhuan astami’, the day of the first born son,” his jejima, father’s mother, had said, much to the young Subrat’s puzzlement and annoyance.

The bus rolled into the bus station at Berhmapur in the morning. The sight of that crossroads in the barracks area, with an island in between where buses exited and entered with a screech and growl, always lifted up his spirits. What a busy, bustling but made-to-measure the town of Berhampur was! Eateries all around, offering hot and filling south Indian snacks, made it a paradise for passengers.

Subrat couldn’t help but think of the poor candle that Bhubaneswar held to the town in this respect. It was a cold and calculating city, a city of distances, unkind to the wayfarer, and a city almost bare of roadside eateries serving south Indian tiffin. Alas, he was damned to the place for good now because of his job switch.

The rickshaw stopped in front of the rickety wooden gate of the one-storeyed building on Bauri Sahi whose first dwelling unit of two rooms and a dining area he had rented. Thank God, it was a Sunday. The day following was also declared a holiday by the newly-elected president of Utkal University Students Union.

Hardly had Subrat stepped inside that the landline phone emitted its hoarse ringing.

“Hello.” Birendra was at the other end. They were together at Berhampur University. His house was in the lane nearby.

“Hello, Subrat. So you’re back. Remember our date with Sekhar tonight? At the dhaba in Jagannathpur. You, me, Suresh and Suranjan. Yes, Sura bhai is here from Santiniketan for the weekend. It will be passport night to mark Sekhar’s first meeting with you. He wants you to do the honours by opening the bottle.”

“I’m feeling a little tired from not having slept on the bus last night and the night before. The marriage lasted until the small hours of the morning. But I’m sure I’ll be fine by evening.”

“A night marriage? But that is a Karana marriage? How come?”

The thing had reared its head again. Birendra had unerringly correlated caste and social ritual. The conclusion now would be that Subrat’s cover, deriving from the elevated ‘Dash’ family name of his grandma, was blown.

The real question, however, remained: how did a caste way of performing a marriage, be it during the day or the night, make it more or less of a union of minds? For that no one seemed to care.