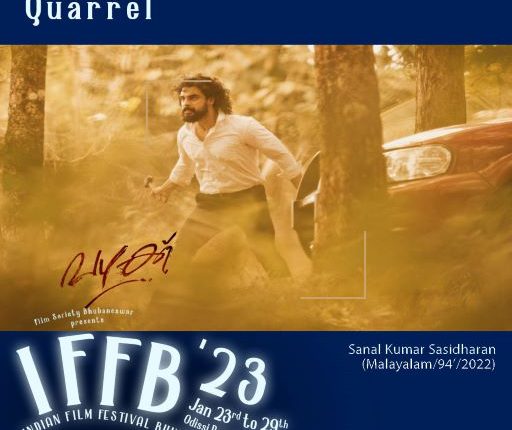 Directed by renowned Malayalam filmmaker Sanal Kumar Sasidharan, the film follows a young lawyer on the brink of a divorce, whose encounter with another woman and child from a broken marriage alters his outlook on life.

The opening ceremony of the festival was attended by Gopee Krishna from Kerala Chalachitra Academy, which organises the International Film Festival of Kerala (IFFK) every year, and honorary president of Film Society of Bhubaneswar Subrata Beura.

In his address, Beura said, “Odisha has a population of 42 million, but we are the only functioning Film Society. We hope with the support of the State’s enabling film policy, film societies will be established across all districts in Odisha. Following the Union government’s decision to close the National Film Archives of India (NFAI) and the reorganisation of the National Film Development Corporation (NFDC), there is no longer any support for film societies.”

He further said the Film Society of Bhubaneswar has managed to organise 12 editions of the fiction film festival and 3 editions of the documentary festival. With its experience of screening films and hosting festivals since 2004, it is well poised to help nurture the film society movement in the State.

In this edition of IFFB, 43 films including 12 films made by students of different institutions like SRFTI, FTII, Shristi College, NID, BPFTIO will be screened. In the Student Films competition, 81 entries have been received from across the country, from which 12 films have been shortlisted. The winners will be announced at the closing ceremony.

Many films which are a part of this festival have won critical acclaim in major film festivals like MAMI, IFFK, Dharmasala, Busan, Talin, Rotterdam and San Sebastian. The focus of this festival is on young filmmakers from different parts of the country, from Kashmir to the North-East.

The major attractions of the festival will be the debut films from areas like Shimla, Darbhanga, Varanasi, and Kashmir. Films of these areas are Amar Colony, Pokhar ke Dunu Par, Jhini Bhini Chandariya and Ches ne Vet. Two films from Manipur by Haobam Paban Kumar and Romi Meitei will also be screened during the festival.

The festival will also hold a retrospective on Satyajit Ray, one of the greatest filmmakers in the history of world cinema, with a line-up that covers his work from 1950s to 1991. Films like Pather Pancholi, Aparajito, Apur Sansar, Mahanagar, Charulata, Pratidwandi, Kapurush, Seemabadha and Agantuk of Satyajit Ray will be showcased at the festival that will continue till January 29.