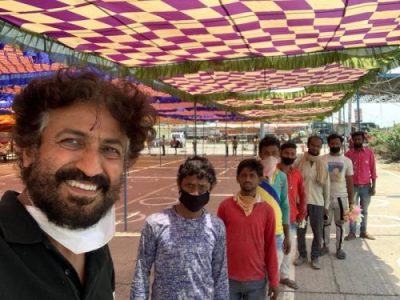 The director took the 1200-km journey to understand the highs and lows of their journey.

Kapri, who won an award for his film ‘Pihu’ in 2018, financially supported the migrant workers stranded in Ghaziabad’s Loni area after coming across a twitter post.  But the group eventually left for their village after running out of food and money. Then, he decided to locate them midway and document their journey to their village.

“They were beaten up by the police and told to return the very day they started. Their cycles breaking down was another issue. They had to pull the cycles for kilometres until they found someone to repair them. Food was certainly the main problem. They had no money, only some stock of chana and sattu,” Kapri told The Outlook.

Besides this, the group felt low on energy after reaching Lucknow and a trucker eased their journey for about 100 km. There were screams of happiness, emotions and love when the villagers reached their village, the director added.

After meeting their family members briefly, the labourers were taken to isolation centres.

With the journey, the director got a new perspective towards the labourers. “When I set out on this assignment, I had this deep curiosity about what makes people take such immense decisions. I wanted to know who these brave people are. I wanted to see them from close,” he said.