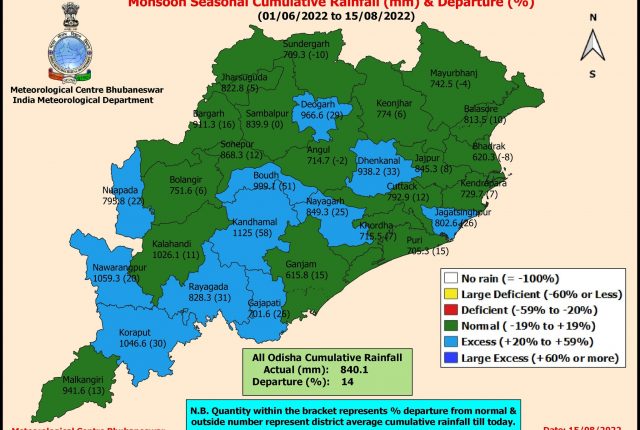 Bhubaneswar: After a week of incessant rainfall due to two back-to-back low-pressure systems over the Bay of Bengal, 11 districts of Odisha have received 14% more rainfall than normal rainfall of 731.1 mm.

According to the weather reports of the regional centre of India Meteorological Department (IMD), 840 mm rainfall has been recorded from June 1 to August 15 in the state.

The Met centre also stated that during this period, 19 districts received normal rainfall.

While the rainfall was 14% less before the onset of the first low pressure system over the Bay of Bengal on August 5, nine districts recorded deficient spells of rain during the same period. The state recorded 120 mm rainfall between August 13 and August 15 due to the active depression.

The depression, which is still active, will weaken into a well-marked low pressure within 12 hours. However, a fresh low-pressure area is likely to form over northwest Bay of Bengal around August 19 due to which heavy rainfall has been predicted in most parts of the state.