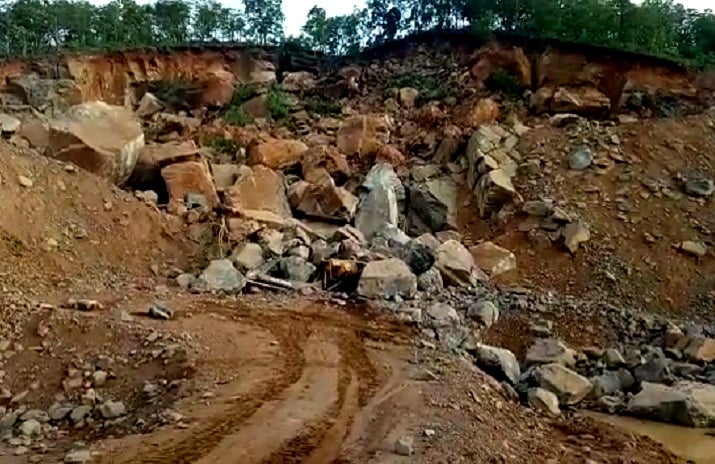 Jeypore: The joint operation by the NDRF, ODRAF and the Fire Brigade to rescue the two JCB operators trapped under a heap of boulders near Bariput village under Borrigumma block in Odisha’s Koraput district, failed on the fourth day on Monday.

According to reports, the rescue operation resumed at 8 am in presence of Koraput sub-collector, senior police officials and the family members of the trapped operators.

The district administration was hopeful that the two trapped JCB operators would be rescued on Monday as it had engaged a high-powered crane, three JCB machine and a stone cutter for the rescue operation.

The two JCB operators— Ghanashyam Guru of Deogarh and Sanjay Dash of Athagarh area in Cuttack district— have been stuck under a heap of boulders since evening on May 31.

While the locals have flayed the district administration for not taking the matter seriously, the kin of the trapped operators are running out of patience.

“We have been here since last four days. What we have observed is that there are discussions among the officials and engineers. It seems that these officials have no urgency to expedite the work and rescue the operators,” said the hapless kin.

A local said the district administration should have gone for advanced technology to remove the boulders instead of engaging the cranes and JCB machines which are of no use.

Though the rescue operation had started on June 1, a day after the mishap that took place in the evening, the two operators could not be rescued as the JCB machine and the crane used in the operation, failed to dislodge the boulders weighing up to 20-50 tonnes.

The two JCB operators were engaged in excavating boulders in the ongoing Telengiri Irrigation project in Bariput village when the hill caved in around 5 pm on May 31 trapping the JCB vehicles and their operators.

Expressing resentment against the gross apathy of the DD Builders Ltd which had engaged the workers without ensuring standard operating procedure (SOP) norm, the aggrieved family members have lodged a complaint with Ranigada Outpost demanding cancellation of the license of the company.

The locals have alleged that the mishap took place due to lack of proper coordination and planning among the district administration, police and the DD Builders which is engaged in Telengiri project work.

Leopard Trapped In Net Laid By Poachers Rescued In Odisha’s…