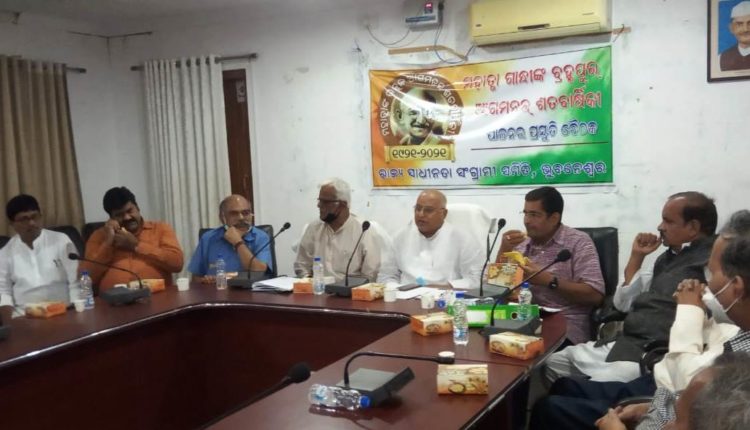 Berhampur: Berhampur gears up to celebrate centenary of Mahatma Gandhi’s first visit to the city on March 30.

The Centenary Celebration Committee, a non-political organisation, consisting of the sitting and former MPs and MLAs of Ganjam and Gajapati districts, intellectuals, educationists and others chalked out the programmes for the celebration at a preparatory meeting presided by Chandra Sekhar Sahu, Lok Sabha MP of Berhampur here on Sunday.

Indian Railways has agreed to display a huge photograph of Mahatma Gandhi stepping down from a train at Berhampur railway station during his first visit, said Upendra Padhi, secretary, ‘Rajya Swadhinata Sangrami Samiti’. A commemoration postage stamp would also be released by the Indian Posts, he added.

A procession singing Ramdhun and holding placards mentioning the Gandhian thoughts would be taken out from Berhampur railway station to Madhu Mandir, where Gandhiji had night halt, in Old Bus Stand area. The committee has also decided to publish a souvenir under the chairmanship of Bishnu Chowdhury, retired professor in Political Science of Berhampur University.

Gandhiji visited Berhampur twice on March 29-30, 1921 and December 3-8, 1927. He also addressed the public at Berhampur railway station for 10 minutes while he was on the way from Guwahati to Madras on January 21, 1946, according to Rabi Rath, convenor of the committee.

CBI Notice To Abhishek’s Wife: Won’t Be Cowed Down, Say Mamata & His Nephew