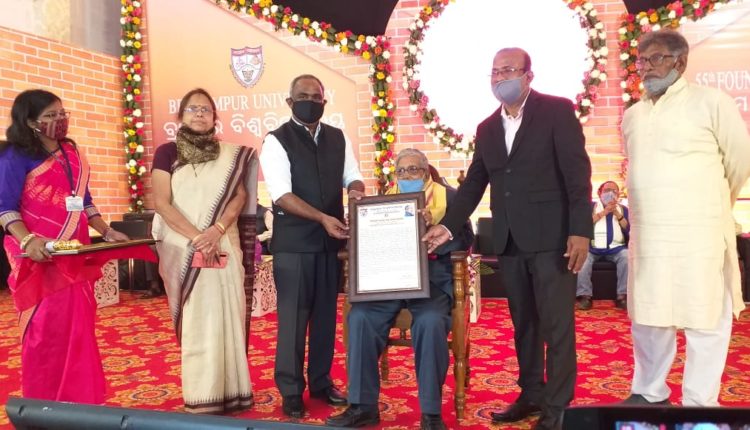 Vice-Chancellor of the Berhampur University Prof Govind J Chakrapani presented the award to Dr Mahapatra during the 55th Foundation Day function of the university on its campus. Prof Chakrapani said despite his workload as IAS officer, Dr Mahapatra has contributed immensely to Odia literature and started his creativity with ‘Dipti and Dyuti’ in 1963.

His works reflect the sorrow and poverty in life. His writings have been translated into more than 20 foreign languages including French, German, Russia, Roman and others, he added. Dr Balabhadra Tripathy read out the citation presented to Dr Mahapatra on the occasion.

In his response to the award, Dr Mahapatra described Kabi Samrat Upendra Bhanja as a great poet and recited some stanzas of Baidehisha Vilasa. He drew a parallel between  Bhanja and Kalidas.

Dr Mahapatra is the recipient of many prestigious awards including Padma Bhushan, Padma Bibhushan, Sahitya Akademi, Jnanpith, SAARC Award, Tagore Samman and many others.

The university was established on January 2, 1967, and its campus was named Bhanja Vihar in memory of Upendra Bhanja, one of the most eminent poets of medieval Odisha. Though born in a royal family, Bhanja had preferred devoting his entire life to literature to ruling over his kingdom.

How A Wild Elephant Was Rescued From A 50-Foot Well

I Feel Like An Empress On Stage, Says Odia Theatre’s…