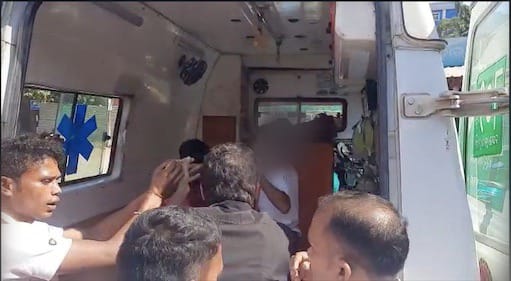 Balangir: Sadanand Meher, the Class IX student of Agalpur High School who sustained critical injuries after a javelin pierced through his neck, is out of danger as doctors at the Bhima Bhoi Medical College & Hospital successfully removed the object after a surgery that lasted for over an hour. The incident occurred on Saturday morning.

The 14-year-old boy was rushed to the hospital in a critical state after the accident. Soon after, medical team comprising seven doctors was formed to carry out the sensitive surgery. The doctors conducted several tests before conducting the surgery and succeeded in removing the javelin from the boy’s neck.

All through the operation district collector Chanchal Jena was present in the hospital along with the district superintendent of police, sub-collector, additional district magistrate (ADM) and district educational officer (DEO).

On learning about the bizarre accident, Chief Minister Naveen Patnaik announced that the state government would bear the entire expenses of Sadanand’s treatment and directed the officials to ensure that the boy was given the best possible treatment.

It is to be noted here that, earlier today, during the annual sports meet at Agalpur High School, a javelin got accidentally penetrated into the boy’s neck. He was soon rushed to Bhima Bhoi Medical College & Hospital by some local people.

It is worth mentioning here that the students of Agalpur Boys’ High School were practicing different sports before the commencement of the annual sports event that was slated to be held at the school on Saturday.

During the practice session, a student threw a javelin that unfortunately pierced into Class IX student’s neck and got stuck below his chin. Sadanand Meher is a resident of Agalpur in the district.

Meanwhile, doctors at the hospital are conducting various tests on Sadanand to ensure that he is in safe health. Local people are all praise for the boy who remained calm throughout the entire difficult period.

Police, meanwhile, informed that they are probing the incident. They would look into issues like how the javelin was given to students and whether any teacher was present when the accident occurred.

China May See Over 1 Million COVID Deaths Through 2023, Projects US Institute