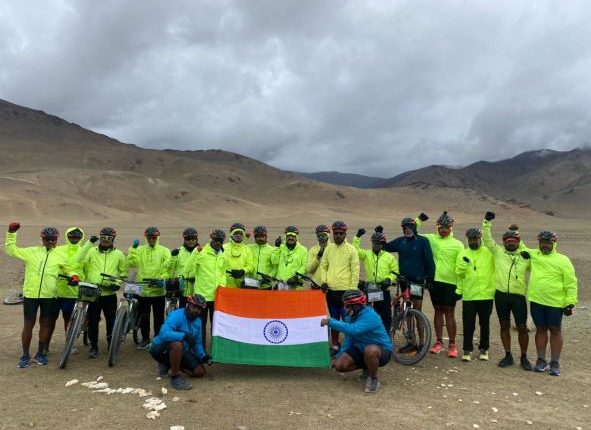 On August 17, the cyclists pushed for the ultimate adventure of reaching the top of KhardungLa – highest pass of the expedition and successfully conquered it.

During their journey, the BCAC team promoted Peace and Friendship along with a pressing concern — #Only_One_Earth. The cyclists unfurled the National Tricolour on August 15 on TanglangLa (17,582 ft) and recited the National Anthem with visitors on the pass.

It was very challenging expedition as the roads were challenging with continuous elevation profiles, mix of tarmac as well as glacier-fed kutcha stretches. At times, team members had to carry their bicycles on their shoulders to cross the washed-away roads due to intermittent landslides and mudslides.

The cyclists faced three seasons on a single day — hit with hailstorms and severe cold waves at one stage, then rains and even highly UV-affected heat.

In the inhabited cold desert, the cyclists stayed in self-pitched tents with no electricity or phone.

“As a citizen of the state and a stakeholder transforming Odisha, it’s a matter of immense pleasure to popularize cycling in the state through this adventure cycling in the Himalayas,” said IPS Sanjeeb Panda, president of BCAC and the expedition team leader.