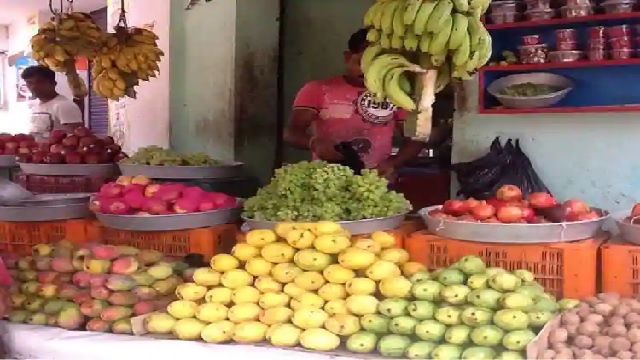 Bhubaneswar: The prices of fruits have skyrocketed ahead of Sabitri Brata and families have no choice but to continue with the purchases to perform the puja. The annual tradition of observing Sabitri brata for the wellbeing of husband, indeed burns a hole in the pocket of the common man.

The prices of fruits have soared in the city markets. Apples which were being sold for Rs 100 a kg about three days back are now selling for Rs 160 per kg and above. Similarly, bananas prices have double from Rs 40 to Rs 80 a dozen and litchi is selling at Rs 140-a-kg. Everyone’s favourite and seasonal fruit  mango is priced at Rs 80-120-a-kg, while coconut is selling at Rs 40 per piece and pineapple at Rs 35 to Rs 40.

Similarly, jackfruit price ranged from Rs 100 to Rs 150, depending on its quality and size, pomegranate was selling for Rs 60-80 a kg.

For some the soaring prices have forced them to reduce the quantity they used to buy till last year. Ramesh Jena, a state government employee said he had bought 10 kg mangoes for his two sisters last year but this year he has bought only 5 kg. “We have to keep the tradition alive and perform the puja too. As a brother it is my duty to send the ‘bhara’ to my sister, so I tried to balance my purchase without altering the budget much,” said Jena.

Deputy Manager (HR) TPNODL, Suman Misra, said “preparations are done well in advance. Every year the price of fruits soar before Sabitri Amabasya. Yet, all satyabans and sabitris continue the tradition and do not hesitate from buying for family. As fruits like coconut, dates and seasonal fruits like mango, litchi, grapes etc are a must in the ‘bhara’ basket, I have bought these.”

“I have purchased fruits that are not very high on my budget but would rather keep my stomach cool to beat the heat as it’s a day of fasting. I have bought mostly local variety like tala saja, jackfruit, dates and mangoes,” said Nanda, a home-maker and a columnist.

Traders, on the other hand, said business is doing well but not as expected. A trader at Kalpana Square said earlier consumers used to buy in large quantities like 10 kg of mango, dozen coconuts, 2 kg grapes and even exotic varieties but now the quantities they purchase have reduced by less than half. So, profit has not gone up but is just at par with previous years.”

On Sunday, the main fruits vending zones of the city at Unit 4, Kalpana and main market were buzzing with consumers. With the festival being celebrated with full fanfare after a gap of two years, consumers are making last minute purchases while traders hope to make the best from the festival.

Sabitri Brata is observed by Hindu married women as a vow with great dedication and pray for their husband’s long life.