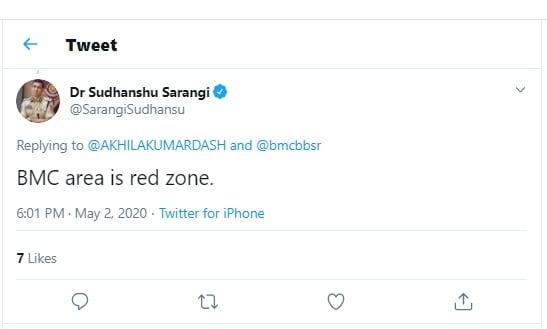 Bhubaneswar: Twin City Commissioner of Police Dr Sudhanshu Sarangi on Sunday responded to several queries on Twitter, clarifying that the areas under the jurisdiction of Bhubaneswar Municipal Corporation (BMC) are in red zone.

Bhubaneswar is in the Red Zone as per MHA, Government of India categorisation.

In another tweet, he said that the Ministry of Home Affairs has categorized Bhubaneswar in the red zone. Previously, Khurda district was marked as orange zone.

Khurda district could be designated as orange zone while areas under BMC will be marked as red zone, sources said.

The Odisha capital has so far seen 47 people testing positive for COVID-19. Among them 31 have recovered from the disease. The virus has claimed one life in the city.