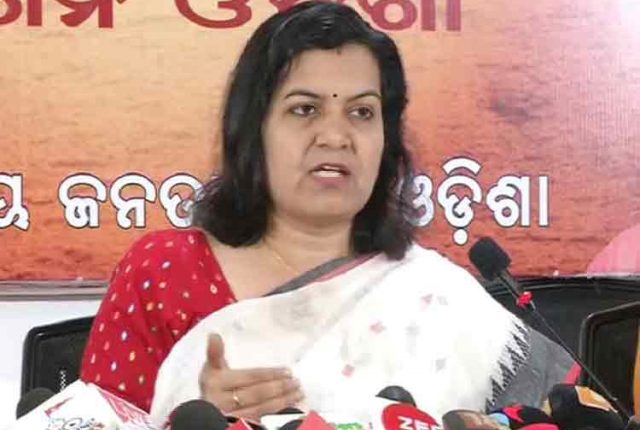 Bhubaneswar: Senior BJP leader and Bhubaneswar MP Aparajita Sarangi on Tuesday lashed out at the BJD government in Odisha, alleging that illegal sand mining was being carried out on different riverbeds in the state.

Alleging involvement of BJD leaders including Ministers in the illegal activities, the parliamentarian threatened to launch a protest to demand steps to put an end to the racket.

Addressing a press meet in Bhubaneswar, Sarangi said she has also written a letter to Khurda Collector K Sudarsan Chakrabarty to draw his attention towards alleged ‘rampant illegal sand mining’ taking place on the banks of rivers Kuakhai and Kusabhadra flowing through Jaydev, Balipatna and Balianta areas.

Stating that she had earlier discussed the matter in the presence of the Bhubaneswar sub-Collector, she said she was assured by the district administration that the illegal activities would be put to an end.

However, the administration failed and the guidelines were being flouted raising safety risks in the area, the BJP leader claimed.

Sarangi, in her letter further stated that she visited the spot upon the request of the villagers and saw several machines at the spot; and, the illegal mining operation was being carried out at night. The MP said that she asked the locals to capture photos and videos of the illegal operations as evidence.

Demanding immediate steps to halt the alleged illegal operations, the BJP leader massive protest including ‘road blockade will be held if the administration fails to take necessary action.