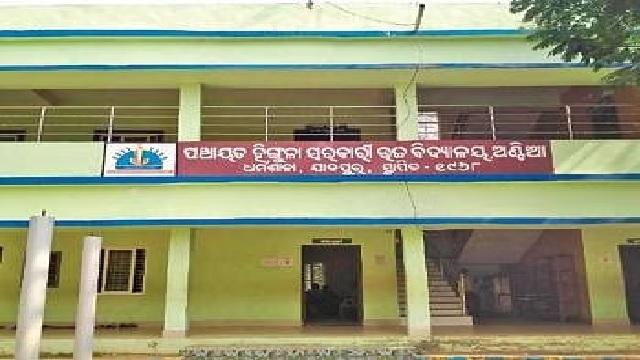 Jajpur: The 5T initiative of the Odisha government was questioned for its aim to develop school infrastructure and bring smartness into government-run schools after the matter of a schoolteacher in Jajpur using the classroom door as a blackboard came to the fore.

A video of the Hingula Uchha Vidyapith at Antia village in Dharmasala block has once again brought the state’s sub-par education infrastructure under scanner. In the video which went viral on social media on Tuesday, a teacher is seen writing questions on the classroom door in the absence of a blackboard.

According to sources, the incident took place during the half-yearly examinations of Classes I to VIII in the school. As per the notification, students of Class V arrived at the school to appear for the examinations on Monday but reportedly, they were not given question papers.

Headmistress Saraswati Panda said they failed to provide question papers to students as the school did not receive them from Sarva Shiksha Abhiyan authorities. “We have two smart classrooms. As the school has more than 400 students in Classes I to VIII, we made seating arrangements in all the classrooms. Since the entire school building does not have blackboards, the teachers had to write the questions on the classroom doors,” TNIE reported Panda as saying.

Notably, the school was upgraded under the government’s 5T Initiative in November last year. At least 500 students are enrolled in Classes I to X.

Meanwhile, District Education Officer (DEO) Ranjan Kumar Giri informed that a showcase notice was issued to Panda for ‘her carelessness and dereliction of duty.’ She has been asked to reply within three days, failing which necessary action will be initiated against her.