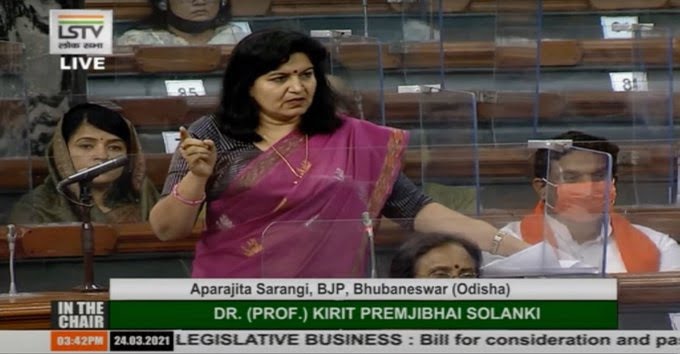 Bhubaneswar: The MP from Bhubaneswar Aparajita Sarangi has raised the demand for a hike in daily allowance for Home Guards in Odisha.

Raising the issue in the Lok Sabha, the BJP leader said Home Guards get only Rs 300 allowance per day for their service and more than 17,000 Home Guards are working in Odisha.

She requested the Ministry of Home Affairs (MHA) to hold talks with Odisha government and hike the duty allowance of HGs in the State. Home Guards are appointed as an auxiliary to police to provide emergency services but do not equal pay as their counterparts.

Citing the Supreme Court’s March 2015 order, she said the minimum daily allowance meant for police should be given to the Home Guards. “The Supreme Court in March 2015 had ordered equal pay for equal work. As it was not followed, Odisha Home Guards Association had approached the Orissa High Court which ordered the government to pay Rs 533 duty call allowance. But the direction has also not been implemented.”

Odishaa! You Won’t Believe How Much Govt Spent On Media Ads To Promote Tourism