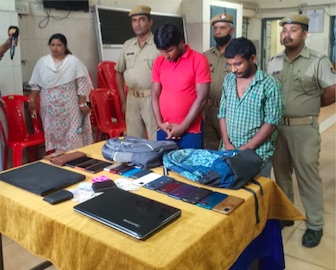 Bhubaneswar: Following a series of loots on Mo Bus in Odisha capital, Commisionrate Police on Friday arrested two pickpockets and seized mobile phones, laptops and cash from their possession.

The accused have been identified as Sanjay Singh and Ganesh Pradhan.

Pickpockets were having a field day on the public transport service under CRUT for the past few days. Following which, police kept track of anti-socials and nabbed the duo from Jajpur district.

“Both Sanjay and Ganesh were nabbed from Dhanamandal of Jajpur district. Stolen articles have been recovered. Ladies and juveniles are also involved in the racket and are being traced, ” a release from the DCP office said.

Fifteen mobile phones, including that of two RD Women’s University students, two ladies’ money purses, a pair of gold ear tops, two laptops with bags and Rs 5,500 cash were seized from them, it added.

On September 16, two passengers were also robbed of their mobile phones on another bus and they suspected involvement of the staff in the incident.

According to police sources, the gang, comprising women and juveniles, is locally known as ‘banjaras’ and they stay in railway stations, abandoned houses, school campuses and roadsides.

Bhubaneswar DCP Prakeet Singh has appealed to passengers to inform police about any such suspicious persons travelling on Mo Bus service, or loitering in any residential area of the city. Denizens have been asked to keep their doors closed in the wee hours and exercise caution in crowded areas as the gang may become more active during the upcoming festive season.

What Is Quiet-Firing? You May Be A Victim