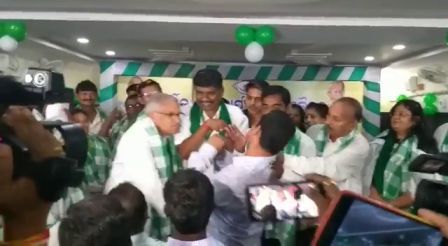 “I utterly regret the incident. I know Sangram for the last 25 years when I was in Congress. He is very close to me. He had left the Congress recently and joined BJD. At the working committee meeting of the BJD in Paralakhemundi, the Gajapati BJD Zilla Pravari Purna Chandra Swain had welcomed him to the party and gave him a party scarf. Instead of wearing the scarf, he requested me to felicitate. This enraged me and I raised my hand and told him to slap. I did not slap him but put my hand on his cheek. I reprimanded him for his indiscipline behaviour and told him that he should respect Swain as he is the district observer. I may be wrong. I should not have lost my temper. Instead of reacting, I should have advised him. During my 45-year stint in politics, I have never done what I did yesterday,” Sahu told the media here.

Asked about the video of the incident which has gone viral on social media, he said it is a party matter. “The media is unnecessarily exaggerating the incident.”

The statement of the BJD MP came after a video showing him slapping Sangram went viral on social media.

Meanwhile, the BJD president and Chief Minister has called him to Naveen Niwas this evening for a meeting on the matter.

On the other hand, Sangram said that Sahu did not slap him. Rather he gently touched his cheek just like an elder brother.

“I had gone to the meeting yesterday to formally join BJD after resigning as the district Youth Congress president. I did not know that the BJD party observer was present at the meeting. When he welcomed me to the party by putting a scarf on my neck, I declined since I wanted it from the MP who I have known for many years. Moreover, it is also due to his blessings that I joined the BJD,” Sahu told the media.